The American Adventure is an audio animatronic stage show located in the pavilion of the same name in Epcot’s World Showcase. The 29 minute show runs continuously throughout the day at a theater housed within the pavilion’s main building.

The theater is located on the 2nd floor of the building. There are escalators to bring most folks up, as well as an elevator for those in ECVs or wheelchairs. 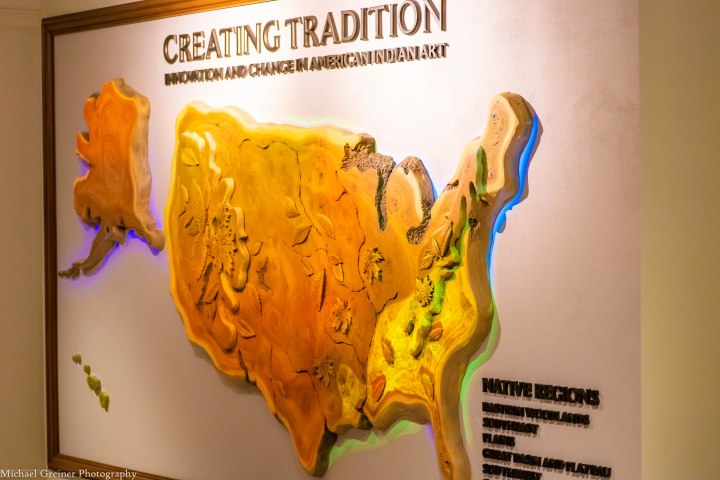 The first floor houses a large waiting area in which The Voices of Liberty perform throughout the day, as well as a small museum. The museum used to focus on African American history but has recently been changed to a Native American exhibit.

The theater itself is lined with statues representing the different jobs and qualities of Americans. They are:

The show is hosted by Ben Franklin and Mark Twain. All of the audio animatronics in this show are top notch! The characters throughout provide insight into American life of the past through conversations in which they discuss the current events of their time.

Here we see Thomas Jefferson struggling to finalize the Declaration of Independence.

As we move to the battlefields of the American Revolution, we see the imposing figure of George Washington contemplating his next move. Inside the camp, members of the Continental Army discuss the cost of war and the suffering they’ve had to endure. 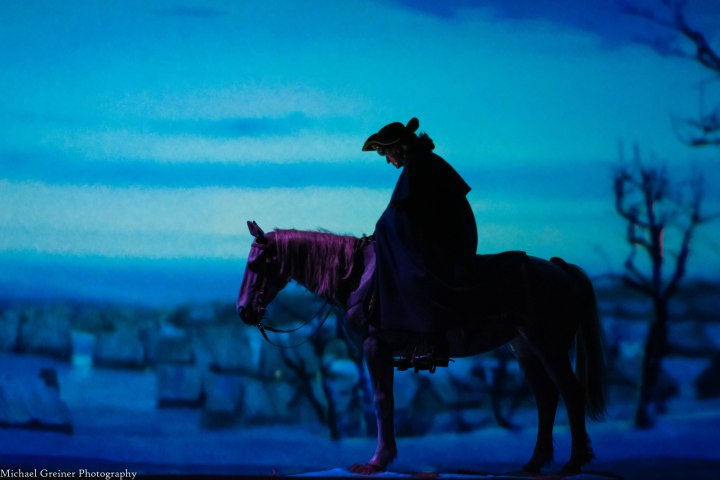 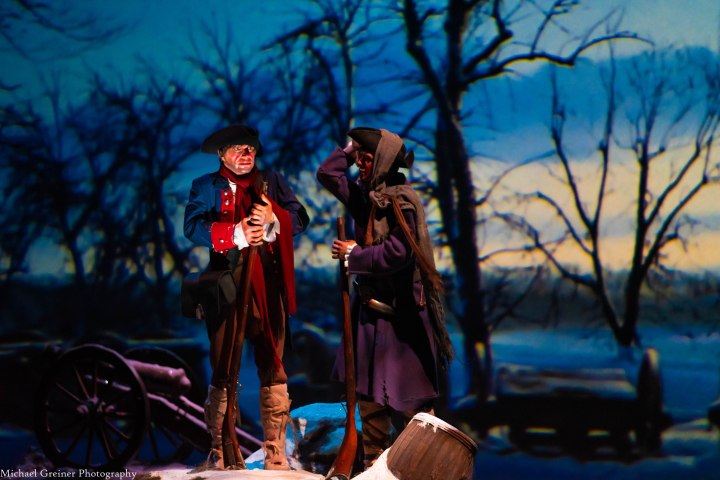 The events are moved along via film snippets and montages. These are typically accompanied by songs written specifically for the attraction. 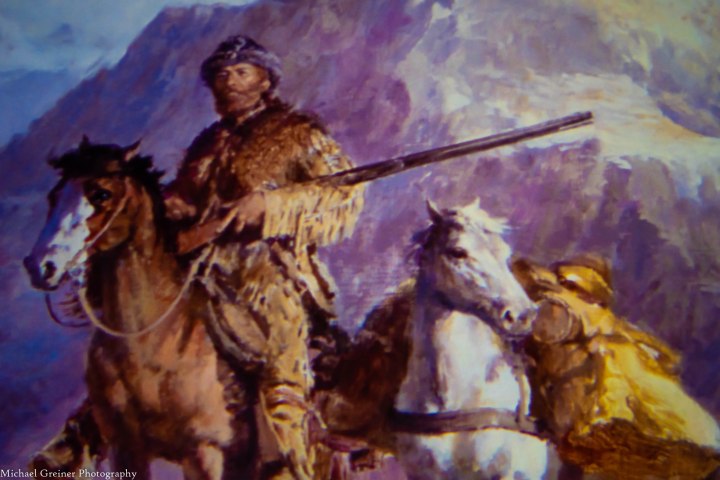 One complaint the attraction seems to get is the glossing over some of the darker aspects of American history. Topics such as racism, equality, and the environment, for example, are treated as solved problems instead of the ongoing challenges they are. We understand the criticism, but also realize its a 29 minute show with a lot to cover during that time. 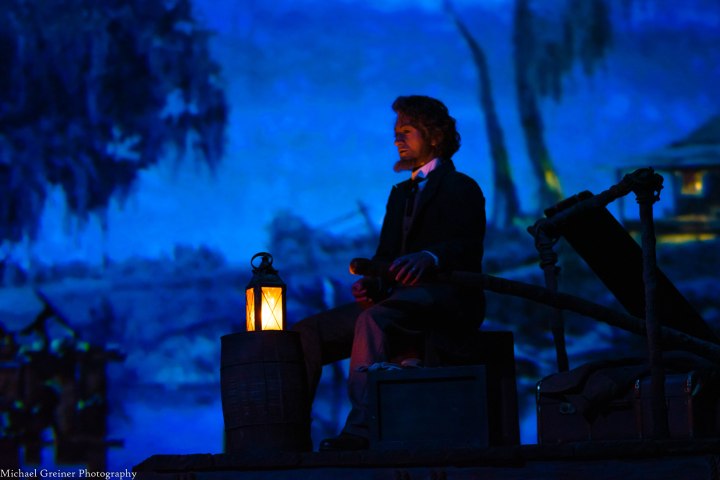 Here we have Fredrick Douglas who comments on how Harriet Beacher Stowe’s Uncle Tom’s Cabin has inspired anti-slavery and cannot be stopped. From there we switch over to an American family getting a family photo taken as tensions rise, eventually erupting in the American Civil War.

The song “Two Brothers” plays as one fights for the North, and the other the South. The song is kind of corny but the reality of it all is anything but. The Civil War absolutely blows my mind when I think about it and this is an emotional sequence. Per our song lyrics, only one of the brothers returns home from the war alive.

We shift to some more people who we as American’s have destroyed over the years; the Native Americans. 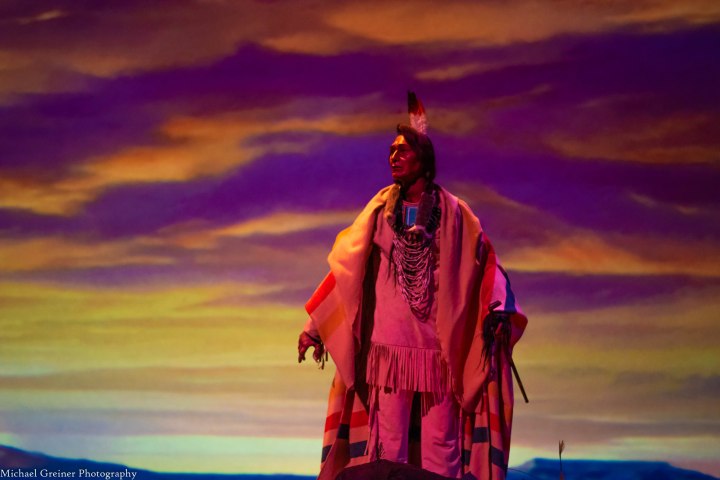 Chief Joseph arrived, cursing the cruel treatment of the Native Americans during and after the war. 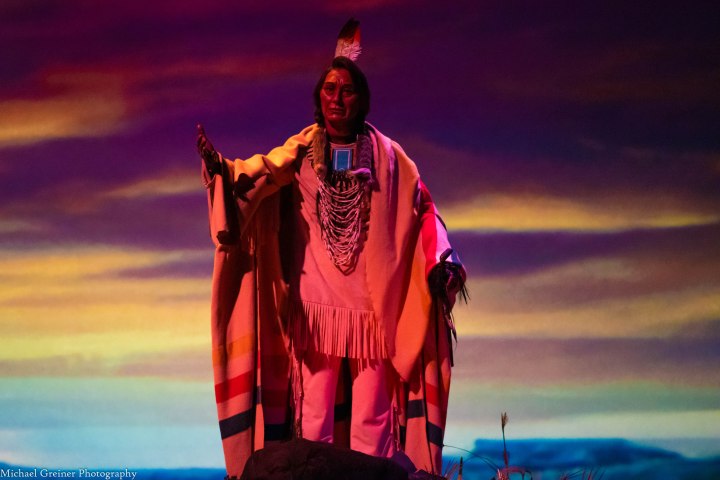 We eventually arrive at the 1876 Centennial celebration. We learn how various immigrants have arrive to help improve the country. Twain, Alexander Graham Bell, Andrew Carnegie, and Susan B. Anthony all stand in booths. 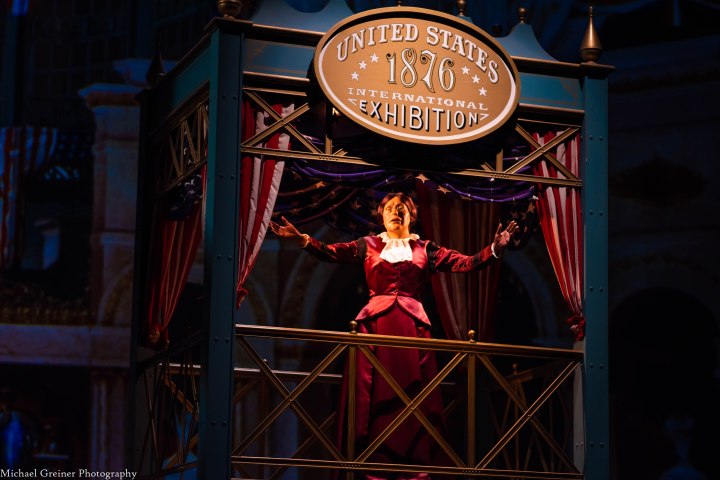 Anthony calls for equality for women.

We next get a glimpse into Teddy Roosevelt and his creation of our countries National Parks. The other gentleman is John Muir. The amount of scene changes this show pulls off is quite incredible. It’s all made possible by a “war wagon” behind the stage. The wagon rotates the correct animatronics and sets into place before rising them to viewing height in front of the audience.

After a World War I montage, we jump ahead to our counties economic struggles following The Great Depression. 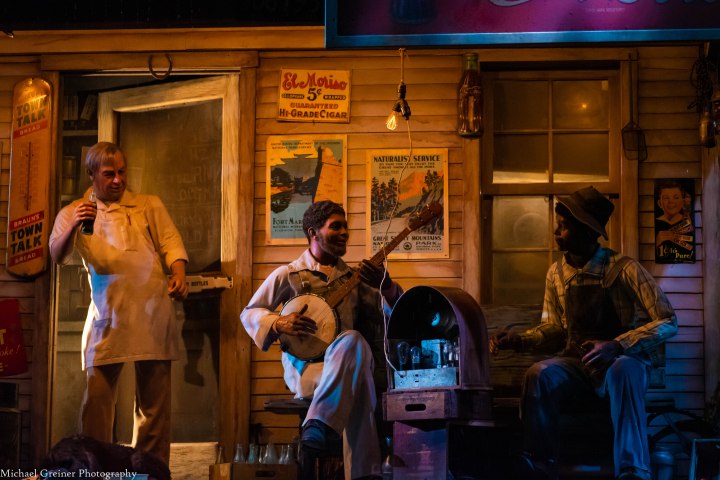 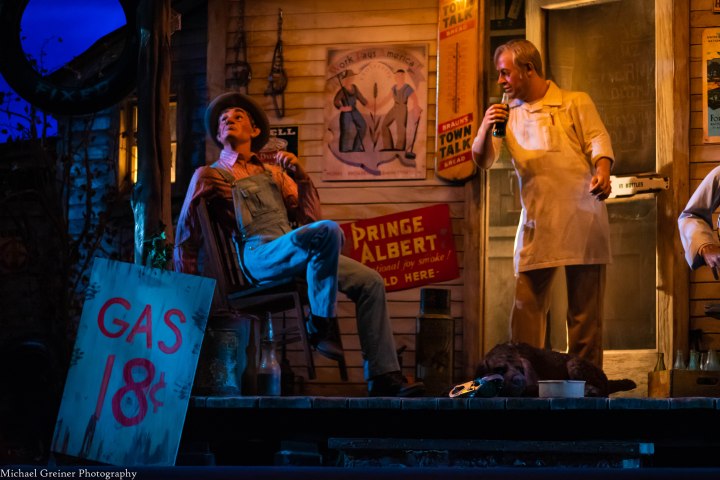 Franklin D. Roosevelt informs us that “the only thing we have to fear is fear itself”. 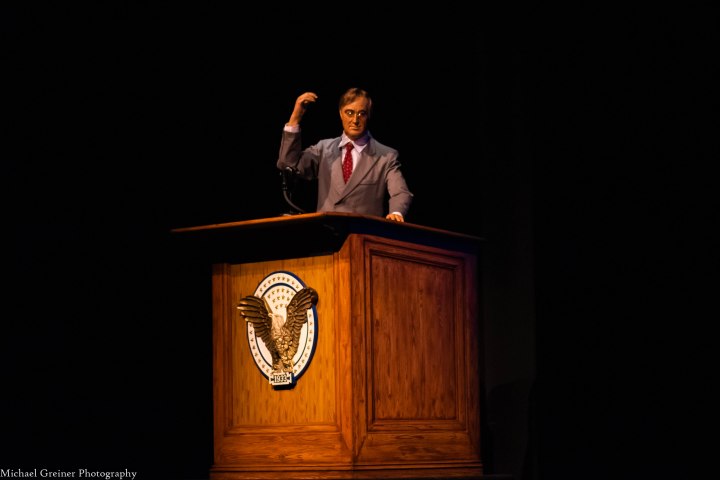 Will Rogers also appears of to the side, commenting that the United States is the only country in the world that goes into war without preparing for it. 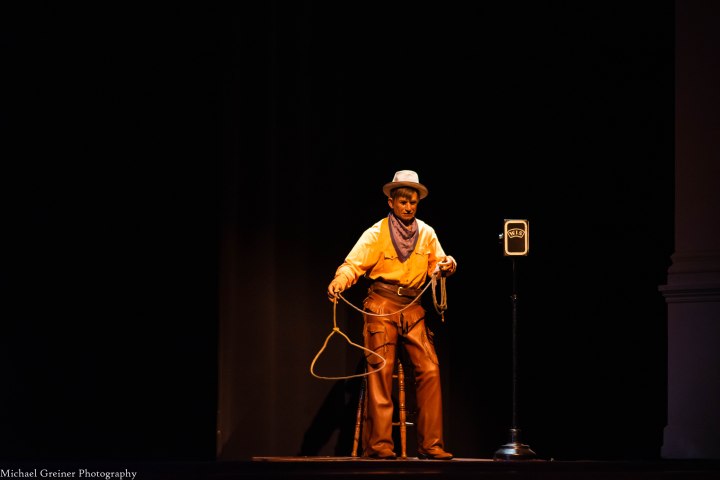 World War II is up next, introduced via a montage of the Pearl Harbor bombing.

A female Riveter (Rosie?) and a sailor discuss their workload over the holidays, hoping that by next year they will be back home again. 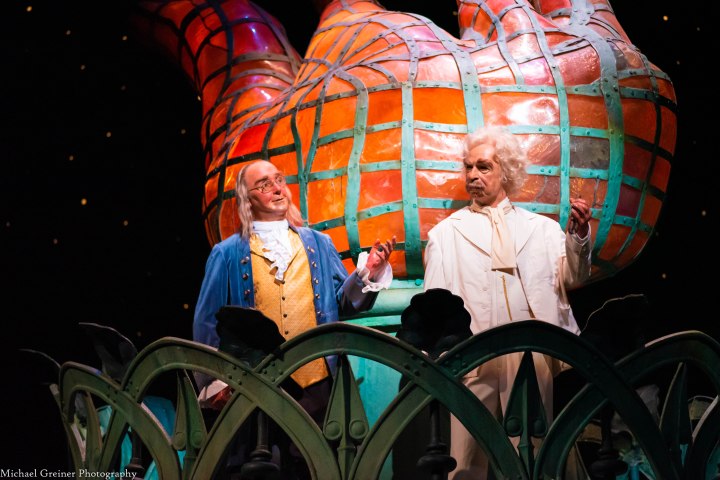 Franklin and Twain rise up on a replica of Lady Liberty’s torch. Both express pride on America’s progress, but Twain quotes Steinbeck’s warnings for the people not to become complacent. Franklin counters, acknowledging the struggles of life, quoting Thomas Wolfe’s belief that everyone in America has the right to live, to work, and follow their dreams.

A reprise of “Golden Dreams” plays as the perimeter statues create silhouettes against the starry sky lit up behind them.

Overall, this is the best patriotic attraction at Walt Disney World. It’s not perfect, but its an incredibly entertaining half hour and feels uniquely Disney thanks to original songs and lots of great animations. We are continuously moved by this production no matter how many times we see it as it really gets the patriotic feelings flowing and arises a feeling of hope for the future.

It’s also incredibly impressive from a technical standpoint. Perhaps Tom from Disney Tourist Blog said it best when he wrote “American Adventure ranks as one of the all-time greatest achievements of Walt Disney Imagineering, and shouldn’t be missed by anyone.” We agree and would take this over the Hall of Presidents any day of the week! 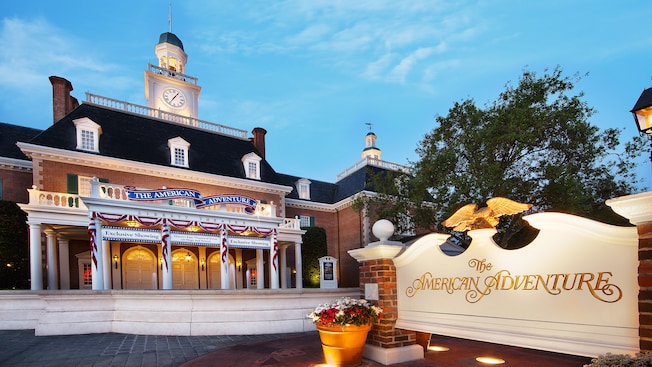 As far as touring goes, the busiest shows are likely to be during the early – mid afternoon. The first and last shows are probably the least crowded. That being said, its a large theater that rarely fills to capacity so anytime you can work it into your schedule should be alright. We strongly recommend you try to find the time to see this wonderful show during your trip!

One thought on “The American Adventure: A Crowning Achievement of Walt Disney Imagineering”