Last week, we reviewed Cruella’s Halloween Hideaway, as well as took an in depth look at the 2019 Boo to You Parade and all its new additions. Today, we are going go into our night at Mickey’s Not So Scary Halloween Party as a whole.

We attended the first party of the year and it was VERY busy! Not only has Disney greatly increased the attendance cap over the past couple years, but this year also adds the debut of the unlimited Halloween party pass. Let’s take a look at what we were able to accomplish with the larger crowds and see if we still feel the party is worth the cost.

I still can’t get used to seeing the Magic Kingdom all decked out for Halloween in mid August. It was a high of around 85 degrees on the day of the first party. That’s actually not too bad for August in Florida, but its still far from what I think of when I think fall / Halloween weather.

Here are a bunch of photos of the Halloween decor around Main Street / the hub.

You can enter Magic Kingdom with your party ticket anytime after 4 pm. The party officially kicks off at 7 pm, however many of the meet and greets start meeting well before then. I was flying in from NJ on the day of the party so I did not arrive until just before 7:00.

With my 7:00 arrival, pretty much all meet and greets already had prohibitive wait times. I was attending the party solo anyway, so I just skipped that aspect of the party this year. Instead, we headed off to Frontierland to catch the Cadaver Dans and hopefully run into the Country Bears.

This is basically just the Halloween version of the Dapper Dans, with all of their songs having some sort of not so scary connection.

Just like the Dapper Dans, they are fantastic. They don’t draw too much of a crowd and are easy to catch throughout the party.

Unfortunately, I didn’t catch the Country Bears who appear as roaming characters around Frontierland throughout the party. I decided to head over to Splash Mountain to see if I could catch a ride on our #1 ranked ride at WDW with a minimal wait.

The attraction was posting a 30 minute wait and looked to be about that with the line still well into the outdoor queue. Add the 12-15 minute ride duration to that and it was more time than I was willing to take away from the party.

Longer lines for attractions was a common theme throughout the night. In past years, very few rides had lines of more than 10 minutes. Here, several were at 30 minutes or longer throughout most of the party. 7DMT hovered around 45 – 60 minutes almost all night.

Instead, I decided to grab some popcorn, along with one of the collectible Hitchhiking Ghosts popcorn box holder thing. 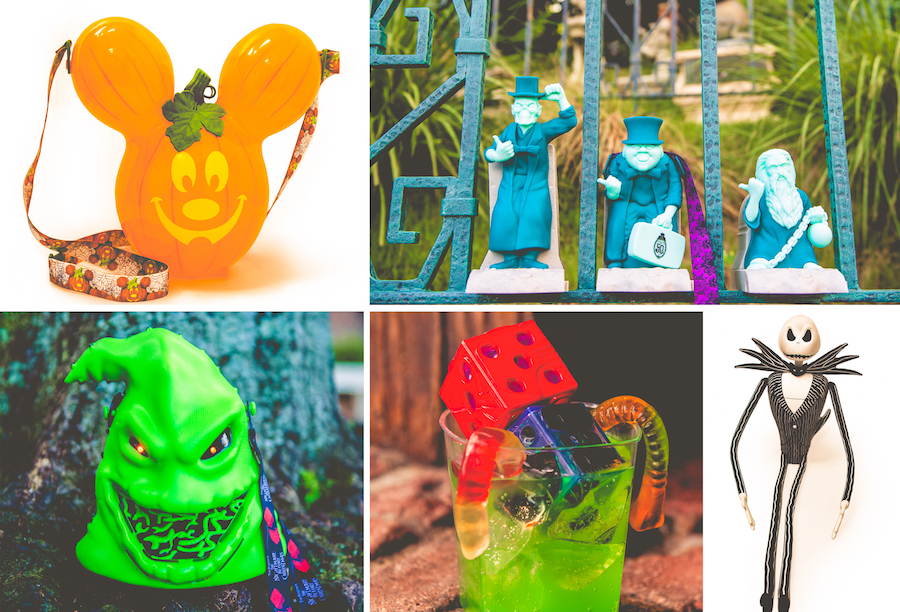 The popcorn (carton) holder is of Phineous, and could be purchased at various popcorn carts in Frontierland / Liberty Square. A Gun Donut Holder could also be picked up at Golden Oak Outpost, as well as an Ezra sipper at Pecos Bills. I paid $18 for the popcorn holder.

Lines for all of the collectible holders were crazy long, at least early on in the night anyway. It was almost an hour into the party and I hadn’t accomplished much. Here is a look at the crowds in Frontierland around 7:45.

The above photo has nothing to do with the party, I just like it for some reason.

It was beginning to get dark so I headed over to the Haunted Mansion. I arrived to a line that was well outside of the actual queue, and listed at 40 minutes.

While the attraction is exactly the same, I still like to ride it (as do many others apparently) during the party thanks to typically more enthusiastic Cast Members (including party specific costuming / makeup).

If your timing is right, you also get to interact with Carlotta while on line or upon exiting the ride.

Thanks to there being no Fastpass during the party, the line moved very quickly. Despite how far backed up we started, the wait was less than 10 minutes to reach the stretching room.

The ride is always one of the best in all of WDW!

It was dark by the time I got off the ride. I decided to hang out for a bit in hopes that Carlotta would be making another appearance.

She did, and shes awesome. This is legitimately one of my very favorite things unique to the event.

Her interactions with guests are continuously hilarious and the over the top performance of the cast member portraying her is perfect. Disney needs to give her a raise asap!

Making our way over through Fantasyland, walkways are pretty crowded here as well. Small World was a walk on but I don’t recommend taking away from party time for that. Peter Pan was still at 40 minutes and Mine Train at 60. Even The Many Adventures of Winnie the Pooh was at 25 and the overlay version of Mad Tea Party at 20.

Lines for meet and greets in Fantasyland were insane as well. The Pooh characters, as well as the Queen of Hearts / Tweedledee & Tweedledum all had waits in the 30 – 45 minute range. I decided to do what any reasonable person would do and take a ride on the TTA Peoplemover.

Below is a really terrible photo of the ongoing Tron construction for anyone interested.

The Monsters Inc. characters are out dancing around the Tomorrowland stage all night long. In addition, this year added an overlay to Monsters Inc Laugh Floor in the form of a continuously running video of different monsters appearing on screen an telling Halloween related jokes every few minutes or so.

A fireworks dessert party (pretty much the same as the Happily Ever After dessert party which we reviewed here) during the event. In past years, I would not even consider recommending this as the Halloween Fireworks have always been very easy to get a great spot for. This year, its a tougher decision thanks to the increased crowds, as well as the new fireworks show focusing on castle projections.

I’d still lean towards passing on this though. Here is the line just to check into the dessert party. Doesn’t exactly look stress free.

By now, it was time for me to head to Cruella’s Halloween Hideaway at Tony’s.

For a full recap of the event, check out our review here!

Overall, I don’t recommend Cruella’s Hideaway. In our full review, I mentioned that the timing is a bit off as you only have about 20 minutes to eat before needing to grab a spot for the new Halloween Fireworks. This year, even that 20 minutes will make it tough to grab a good spot.

I was attending Cruella’s Hideaway with Josh of Easy WDW and Tom from WDWNT. I headed about 10 minutes before them to grab a spot and this is what I found:

I was able to barely squeeze into a decent spot in the hub, but it was far from comfortable. I wasn’t even going to attempt to get my tripod set up as originally planned. Josh and Tom went out just a few minutes before start time and were forced to watch the show from about half way up Main Street. They said that the lighting on Main Street interacts with the show which was cool, but its harder to see the projections from back there and you miss a lot of the perimeter bursts.

Here are some not so good handheld shots of the new fireworks show.

The new show includes more frequent perimeter bursts throughout, but they are tighter in towards the castle than in previous years. Supposedly they had to move the launch zones inward due to Tron construction.

Overall, I was mixed on the new fireworks show. Its very short compared to Happily Ever After (although not too far out of line with Hallowishes), and some of the segments are just bizarre. There is also a couple minutes where it just plays Disney music that has nothing to do with Halloween.

I have to see it again to form a better opinion, but my initial thoughts on it were that it wasn’t great. Certainly not the home run that Happily Ever After is!

A lot of folks seem to call it a night after viewing the first Boo to You and then the fireworks. Here is the mob scene I was looking at as I made my way back to Tony’s.

After a couple more plates at Tony’s, I made my way out to grab a spot for the 2nd Boo to You Parade. Since I was in the reserved viewing area for the Halloween Hideaway event, this was fairly stress free. If you are hoping to grab a spot on either side of Main Street for the 2nd parade, I suggest arriving no later than 10:45 pm. The further away from the castle you get, the slower it will fill up. If you want to wait til the last minute, I suggest trying to grab a spot either right in front of the Town Square Theater or the train station.

The parade continues to be one in the best pieces of entertainment in any Disney park! For the full parade, check out this post here!

Here are a few highlights:

To end our night, we headed back to the castle stage to check out the midnight showing of the Hocus Pocus Villain Spelltacular. We reviewed this show in full during our 2018 coverage of MNSSHP. You can check out that post here!

In short, its one of the best stage shows ever produced for WDW. All the same actors have returned from last years which is awesome! I suggest viewing from across the street on the back side of the Partners statue. You’ll be a bit further away but it will greatly reduce your risk of having a stray cell phone or shoulder child blocking your view.

Who’d of thunk that Oogie Boogie’s song would make such a fine showstopping number. Makes me wish they would create a Broadway musical based on The Nightmare Before Christmas!

As the show ended, so did our night at Mickey’s Not So Scary Halloween Party.

Overall, I still really enjoyed my time at the party even though crowds forced me to adjust my schedule compared to other years. If meet and greets are important to you, or if you plan to trick or treat, you will spend a good deal of your evening in long lines. Attraction lines are also longer than they have been in past years.

Still, the atmosphere around the park is great, the entertainment is top notch and there are enough unique things to do that we still recommend attending MNSSHP if you can swing it!