Three Bridges Bar & Grill is the new restaurant located over the water of Lago Dorado at Disney’s Coronado Springs Resort. The restaurant features and open air atmosphere with lounge style seating, similar to Geyser Point over at the Wilderness Lodge. The food is a casual take on Spanish-American cuisine, offering a slightly upscale take of a typical bar menu. 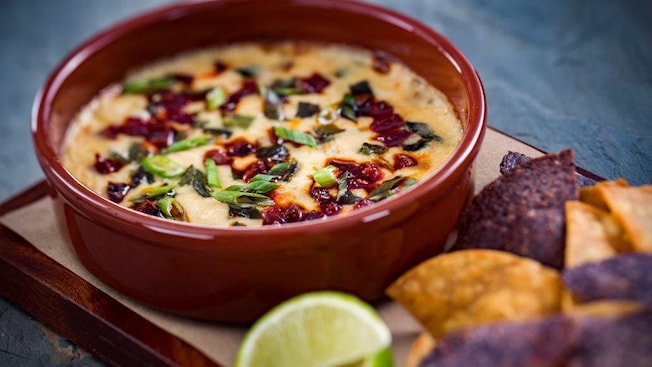 The restaurant gets it’s name from its location in the (not quite) middle of the Lagoon, in which three separate bridges from different sections of the resort all merge together. Disney has some well contrived backstory for this on it’s website, indicating its meant to represent an era in which intersecting travelers dined together and shared stories of adventure with one another.

It’s all a little more convoluted than it needs to be, as is the name of the restaurant itself. The actual building atop the water is Villa Del Lago, which was originally assumed to just be the name of the restaurant. Instead, they went with the Three Bridges name (which is fine) but they still kept the name and signage for Villa Del Lago. So officially, it’s Three Bridges Bar & Grill at Villa Del Lago. I know that it really doesn’t matter to anyone and its probably a waste of time even bringing it up, but its just seems excessive to me.

Anyways, lets get onto the restaurant itself. Three Bridges is currently only open for dinner, operating from 4:30 pm – 12:00 am daily. I was quite surprised to learn it doesn’t offer lunch as much of its menu is made up of small plates and sandwiches. Still, its a good option to grab an early dinner before heading back to a park for the night.

I really liked the open air environment of the seating area. It was a hot day out yet we were still perfectly comfortable with the covered seating and a nice breeze. In additional to the typical dining tables / chairs, there are various lounge seating areas throughout the space.

The faux fireplace seen below looks great and doesn’t actually give off any heat.

The bar area is located in the center of the restaurant. The similarities to Geyser Point are definitely there, however this is a full service restaurant as opposed to the fast casual style of Geyser Point.

Our table gives us a good view of the new Gran Destino Tower (which we were staying in at the time). A lot has been said about this tower being an eye sore to the rest of the resort, however it really didn’t bother us.

I was more worried about how the restaurant would look in the middle of the lagoon to be honest. One of our favorite aspects of the resort was always the gorgeous views across the water, especially at night.

While the new bridges and restaurant do impact that view to a degree, its not as bad as I had feared it would be.

The restaurant is actually located more towards the back side of the lagoon (near the Dig Site and Ranchos section) so the view of the front half of the resort across the water is still pretty solid.

It also makes getting around the resort a heck of a lot easier. The walk from Ranchos to El Cento is significantly shorter with the ability to cut across the water.

It will also allow those staying on the opposite side of the resort to access the Dig Site pool much more easily.

You can see the pyramid from the pool area on the left side of the photo above.

The view of the water from the Ranchos area is definitely more effected by the new structures. At least they added a fountain to make the visual a bit more appealing.

Back to the restaurant itself, the menu is this cool little booklet. As you can see, it focuses mostly on drinks, with the food getting a single tab at the end. That beings said, the menu is fairly substantial. There are 5 appetizers, 6 entrees and 2 desserts to choose from.

Here is an easier to read version of the menu from the Disney World website.

We did not partake in any alcoholic beverages this trip (I was with my niece) but I refer you to this post from wdwnt where the review several of the cocktails offered.

For my meal, I ordered the $16 Three Bridges Signature Burger. The burger is decked out with crispy potato, Manchego cheese, arugula, tomato and a roasted garlic-lemon aïoli. It’s comes with your choice of paprika fries or a side of fruit.

This was hands down one of the best burgers I’ve ever had a Walt Disney World. It was cooked to a perfect medium rare (as ordered) and every bit was full of juicy flavor. All the ingredients were fresh, high quality; including the roll which held up nicely to all the toppings. The aïoli really kicked things up a notch! The fries were also a home run! Perfectly crisp and seasoned nicely with the paprika adding just the right amount of kick. Really great dish!

My niece Bella ordered the $14 Crispy Chicken Biscuit Sliders. The sliders are topped with hot honey, blue cheese and a creamy slaw. These were good, but not great. The chicken was nicely seasoned but the biscuit was very dry. You could taste the honey but it probably could of used a little more of it. Still, I wouldn’t have been disappointed had I ordered this. The flavors were all there!

After my entree and before desert, I decided to walk around a bit and take in some of the more subtle details around the restaurant.

The best by far is this Ducktales comic page hanging on the back wall near the fireplace!

For dessert, we decided to share the $9 Warm Churros. These freshly prepared churros, served with a warm chocolate sauce, are way better than what you would find inside the parks.

The portion was definitely a good size for us to split.

Overall, we are fans of Three Bridges Bar & Grill. The water top restaurant serves quality food at near counter service prices. It’s also a very pleasant atmosphere and we imagine it would be mighty beautiful once the sun goes down!

We will be back soon with a full review of Disney’s new Gran Destino tower! Until then, thanks for reading and bye for now!

One thought on “Dinner at Three Bridges Bar & Grill”