In our previous post, we took a look at Magic Kingdom’s Fantasyland Early Morning Magic event. We left off eating the breakfast while being serenaded by the sweet sounds of Sonny Eclipse at Cosmic Rays. 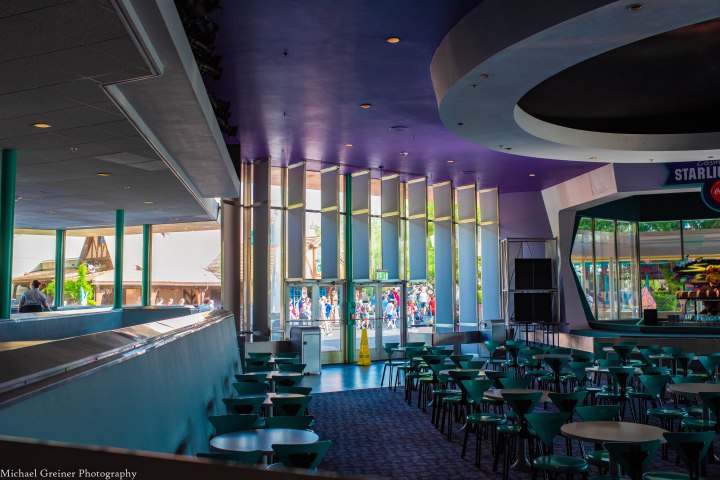 We were still eating when the rope drop crowd above was let loose towards 7DMT. Thanks to early morning magic, we already knocked out most of Fantasyland, with the exception of Storybook Circus, Enchanted Tales w/ Belle and Mickey’s Philharmagic.

It can’t be understated how valuable this is on a busy day. As soon as the rope drop crowd arrives, 7DMT will be looking at hour plus waits throughout the day. Peter Pan will be up there as well. By 10 am, even Winnie The Pooh and Little Mermaid will be over a half hour.

Ideally, you would like to be wrapping up breakfast at right around 9 am so you can take full advantage of the first hour after park opening. As is typical, I didn’t listen to my own advice this day and was still eating at quarter after 9.

Where you head first, is largely going to be based on which fastpasses you have selected ahead of time. If you don’t have a Space Mountain fp, I would probably start there, followed by Buzz Lightyear. While you’re at it, take a ride on the Peoplemover! 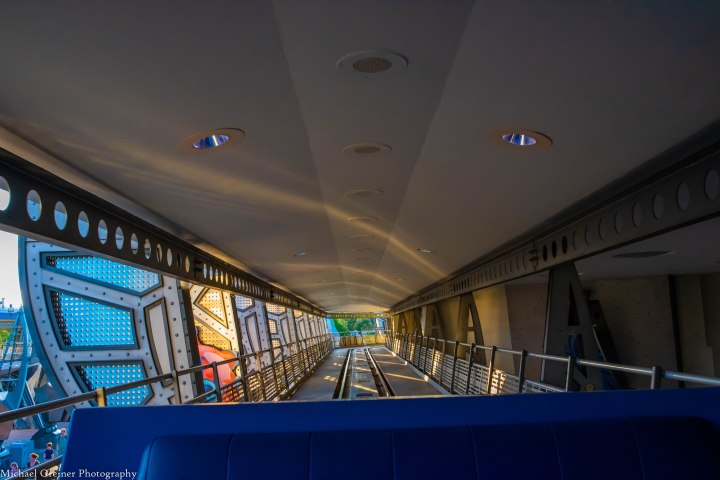 This day, I had fastpasses for Splash Mountain, Jungle Cruise and Space Mountain in that order. My plan was to head over to Haunted Mansion first thing, followed by Big Thunder before using my Splash fastpass.

Unfortunately, Haunted Mansion was closed at park opening so I just headed straight to Frontierland. I decided to walk through Adventureland to see what waits for Jungle Cruise and Pirates looked like.

Not much of the rope drop crowd heads this way. Its still not very crowded 20 minutes after opening.

Jungle Cruise, does however, already have a 35 minute wait posted. Pirates is more attractive at 10. 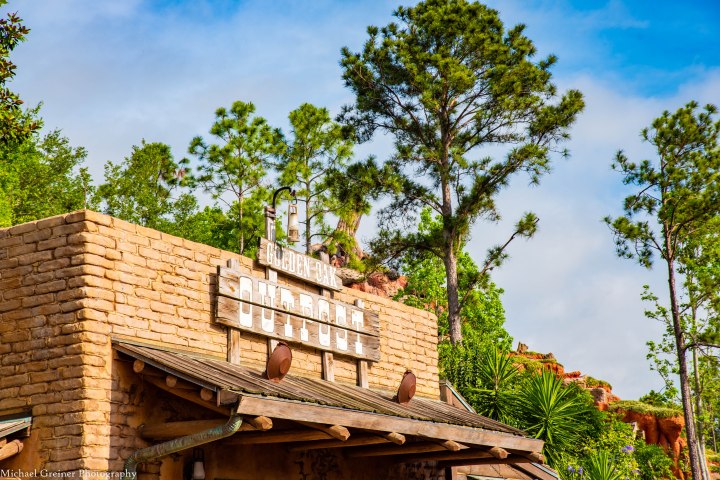 Making our way over towards Big Thunder, the walkways of Frontierland are pretty clear. 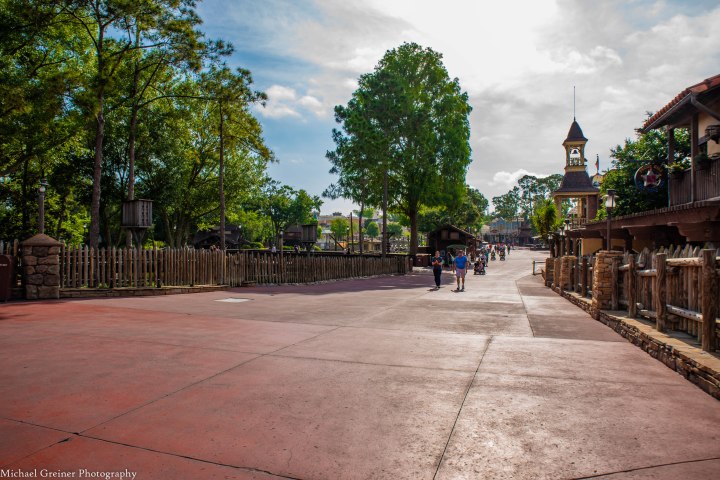 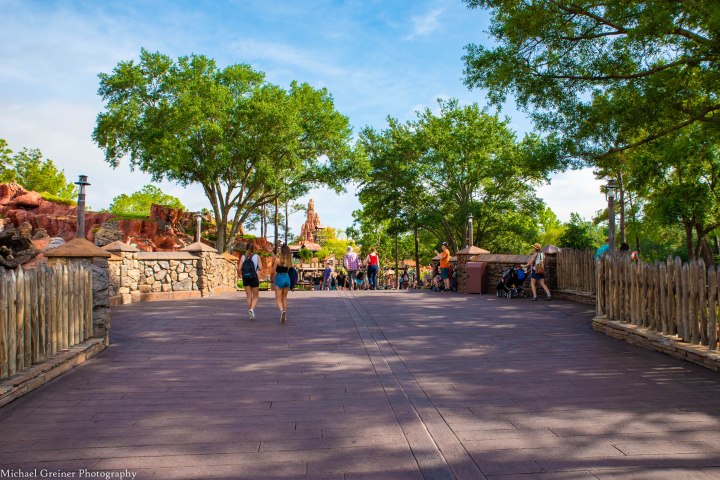 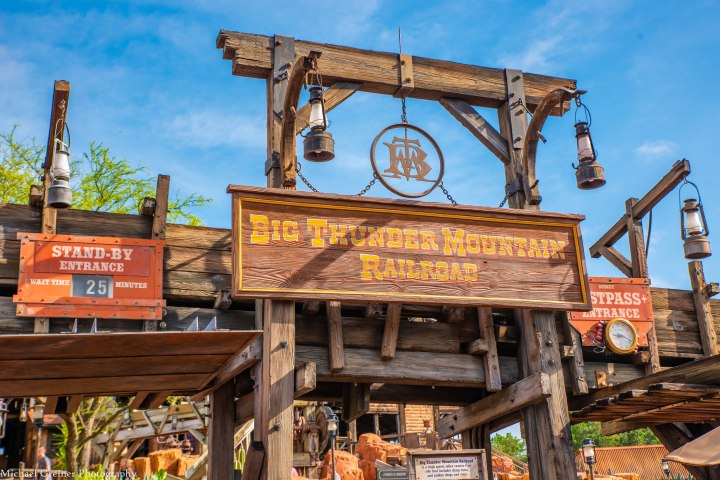 At 9:22, Big Thunder Mountain is already posting a 25 minute wait. Had I finished breakfast by 9 and headed right here, it would have been a walk on. 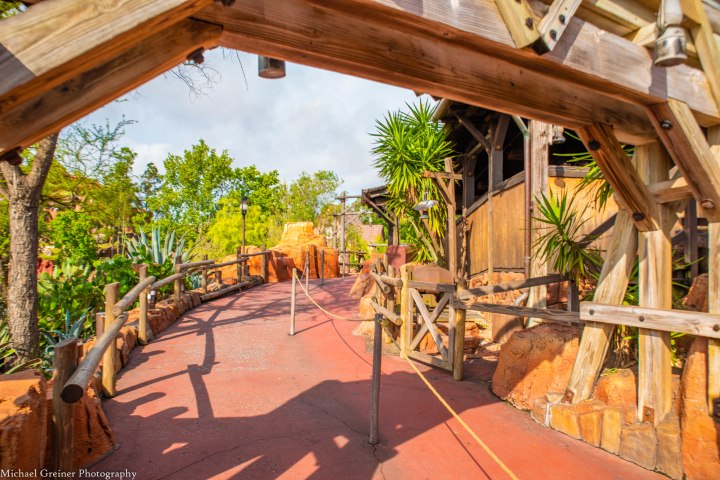 Luckily, there aren’t many fastpasses arriving this early to eat up capacity so the line moved very quickly. We were at the fp merge point in just about 8 minutes. Had Disney been operating both sides of the ride, the wait would have been non-existent.

We are ready to board 3 minutes later for a total wait time of 11 minutes. 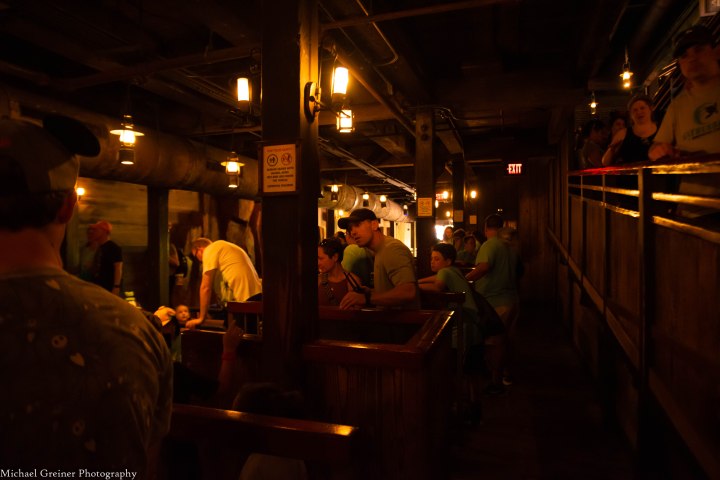 The BTM queue has some of the best signs in all of Magic Kingdom!

It also has (fake) goats, which is really all any ride needs to be awesome! 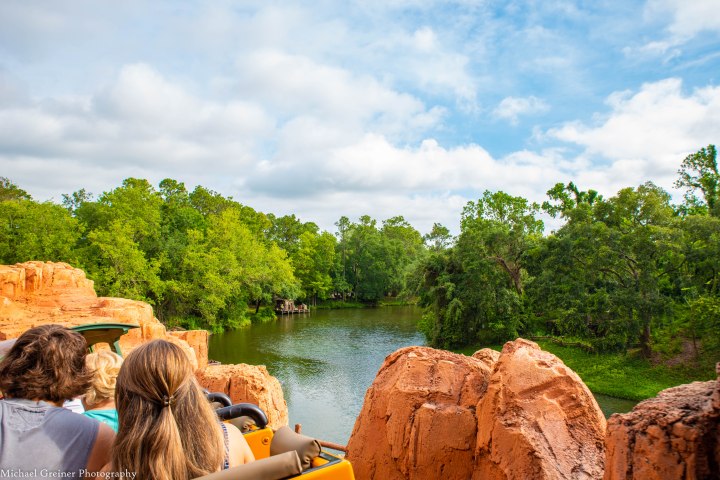 Next, we are heading over to Splash where we have a fastpass. 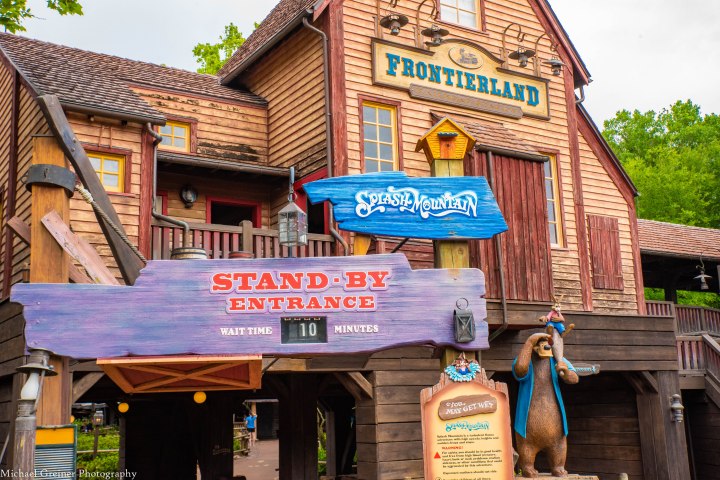 This is another case of not following my own advice. I would suggest booking your 3rd fastpass of the day for Splash, rather than the 1st. Waits are usually minimal here the first couple hours of the day. Since I booked these the night before, I had to take what I could get. 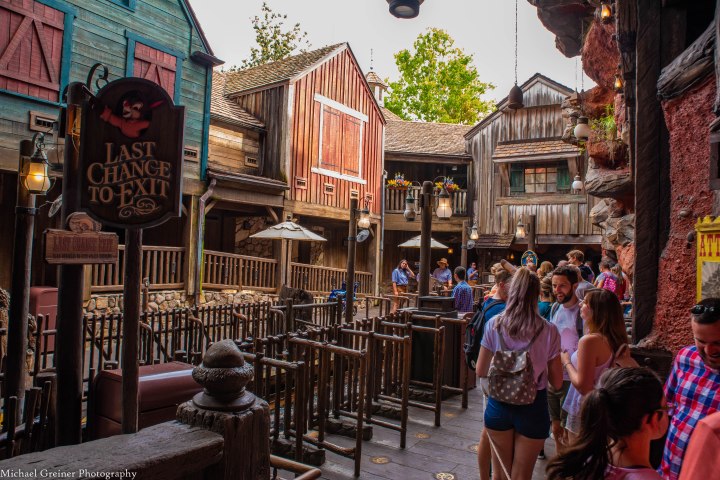 We were still able to save some time as the posted 10 minute wait looked more like 15 (backed up to the stairs at the building entry). With fp, we were able to walk to here without stopping once.

The ride ranks as our #1 attraction in all of Walt Disney World! 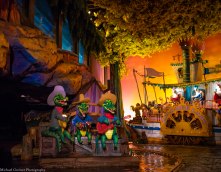 Lately, the water jets at Splash have been turned up to full power as well which is awesome. It’s the first time in quite a while that I’ve seen the bridged getting splashed as the logs plummet in the Briar Patch. 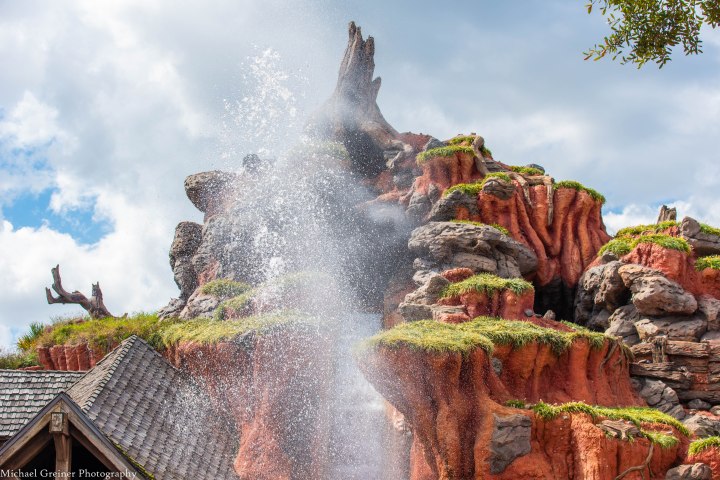 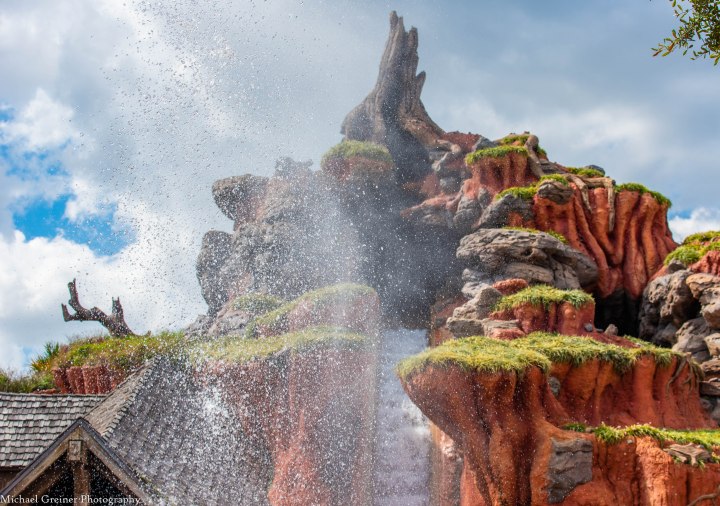 At this point is was 10:06 am. Lets take a look at the wait times around the park.

Haunted Mansion is still down, as well as Pirates. Waits around the rest of the park are moderate to high for this early in the day. We are heading to the Jungle Cruise now where we see a 60 minute wait already. Luckily, we will be using our 2nd fp here.

Even the fastpass line was backed up quite a bit, but we were still ready to board about 6 minutes later.

Hopefully, we make it back. Perhaps we can even score a new job!

While in Adventureland, we always like to make a stop at the Tiki Room.

We took a ride on the Aladdin Flying Carpets as well, because why not. It had a 10 minute wait posted but we were on the 2nd group to ride after getting in line. While we were in the area, we figured we might as well hit up Country Bear Jamboree as well! 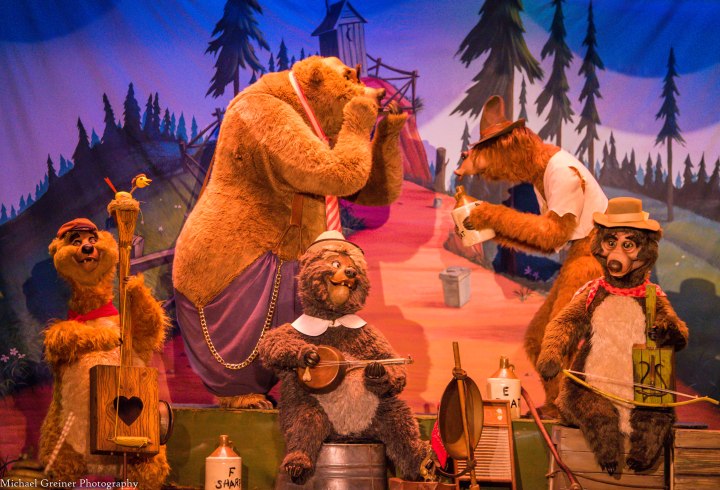 Our fastpass time for Space was coming up so we started heading over that way. 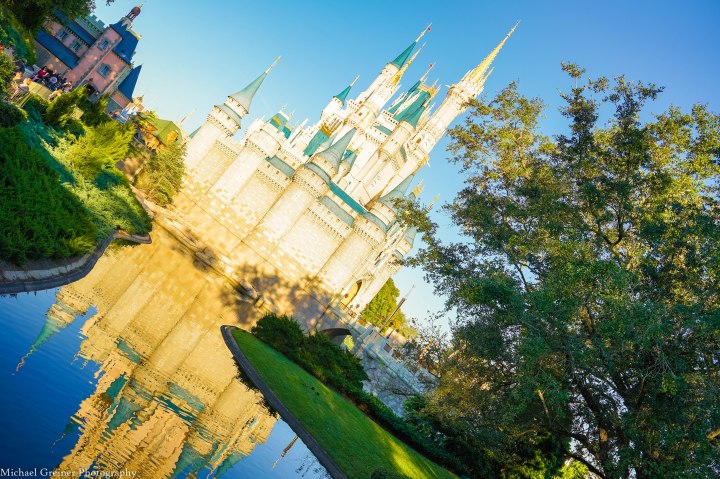 While we were doing so, the Main Street Trolly Show was just kicking off in the hub. This is the type of attraction at Magic Kingdom that is criminally underrated. Its a short, incredible charming and entertaining little performance. It exudes everything that is great about the Magic Kingdom! 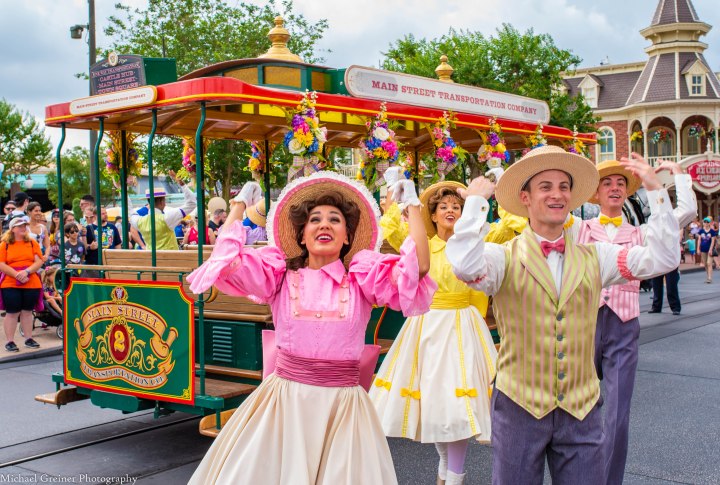 The ensamble actually performs the show 4 times as it heads down Main Street.

I recommend following the Trolley at least as far down to the 2nd performance as its completely different from the 1st. The 3rd and 4th performances repeat the 1st and 2nd respectively.

The last performance area is right in front of the train station in Town Square. 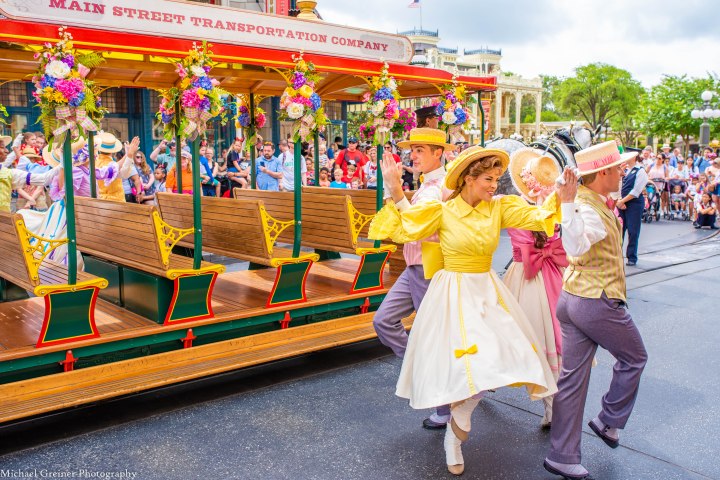 Getting back on track, we head over to Space Mountain to use our 3rd fastpass. 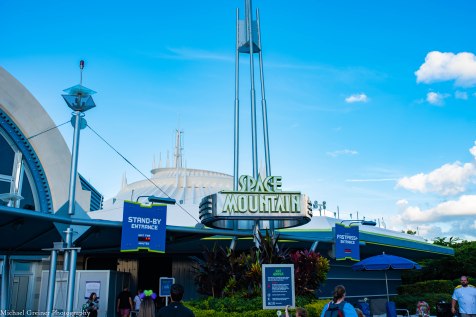 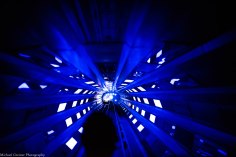 We wrapped up our first half of the day by taking a ride on the Peoplemover, followed by a relaxing viewing of Carousel of Progress! 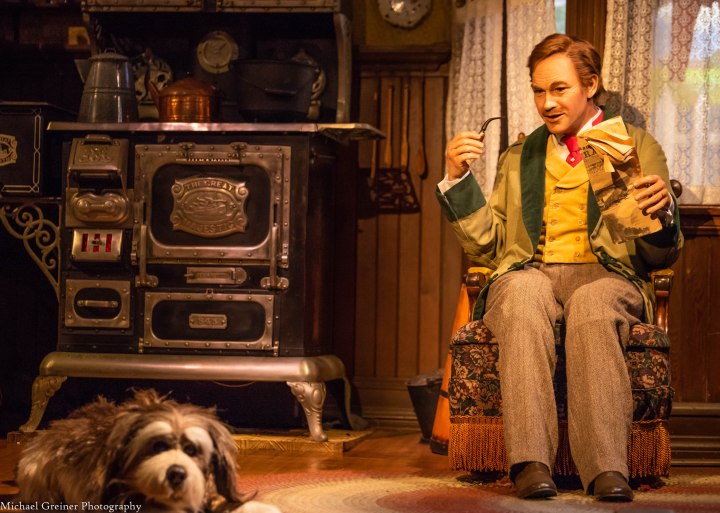 By 1:00 here is what we have accomplished, including during Early Morning Magic:

At this point we decided to head back to the hotel for some pool time. The park was getting very crowded, and it was very hot out! By doing Early Morning Magic, we were able to do 16 attractions, as well as have a nice breakfast, all with little to no waits!

We returned to Magic Kingdom right around 6 pm to knock out some of the things we missed earlier in the day. 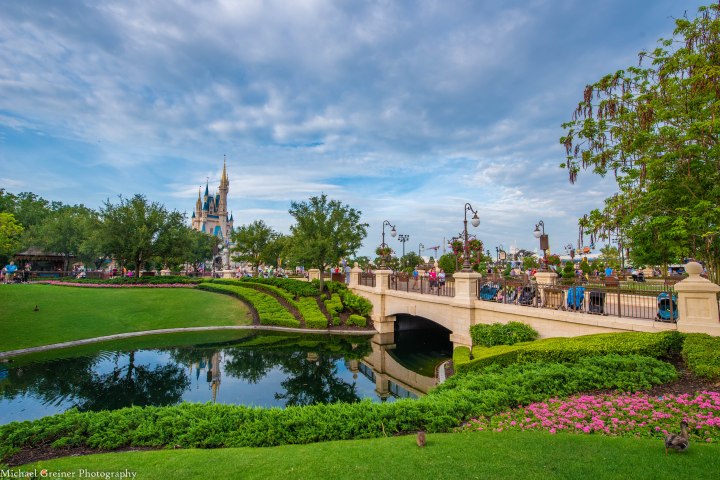 I was able to grab same day fastpasses for both Pirates and Haunted Mansion without much trouble.

Pirates popped up immediately, while I had to play the refresh game a few times to score Haunted Mansion.

After a viewing of The Hall of Presidents, we headed over to the hub to grab a spot for Happily Ever After. We grabbed a spot on “the hump” about 45 minutes prior to showtime which was more conservative than we needed to be.

We previously reviewed the Happily Ever After Dessert party here, which allows you to not worry about scoring a spot early at all. 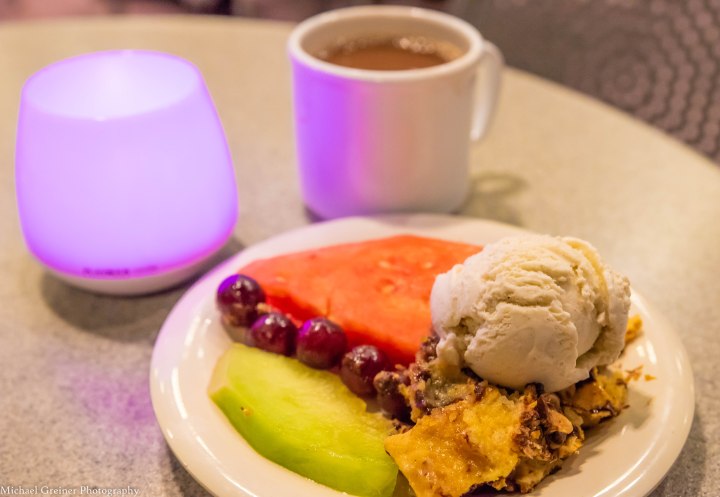 In reality we could have gotten a decent spot in the hub until around 20 minutes, prior to show time, or even last minute if we took advantage of when all the folks sitting stand up which creates a lot of extra space.

Unfortunately, even with staking out a good space in advance in the hub, you still will be crammed in like sardines and people will jump right in front of you to grab a last second spot. You are also likely to have a few shoulder kids or a stray iPad pop up in front of you as well. For these reasons, the dessert party is the more enjoyable (albeit expensive) experience.

The show is amazing no matter where you view it from at least!

Overall, we had a super productive day at the Magic Kingdom, even when taking a 5 hour break during the hottest, busiest hours of the day. For this, we recommend at least considering Fantasyland Early Morning Magic during your trip. Its expensive, especially for a family of 4 or more, but it will allow you to have a much more enjoyable day at WDW’s flagship park!