Today we are going to take a look at our recent experience at Animal Kingdom’s After Hours Event. We have previously attended the Hollywood Studios and Magic Kingdom After Hours events and had wonderful times at both. Sadly, this was not the case at Animal Kingdom this particular evening.

I’ll start off by saying that on the night of our event it was a pretty steady downpour the entire time. I’m not sure how much exactly the rain had to do with it, but waits were considerably longer than we had experienced at the other parks. In addition to that, multiple areas of the park were closed off to guests. 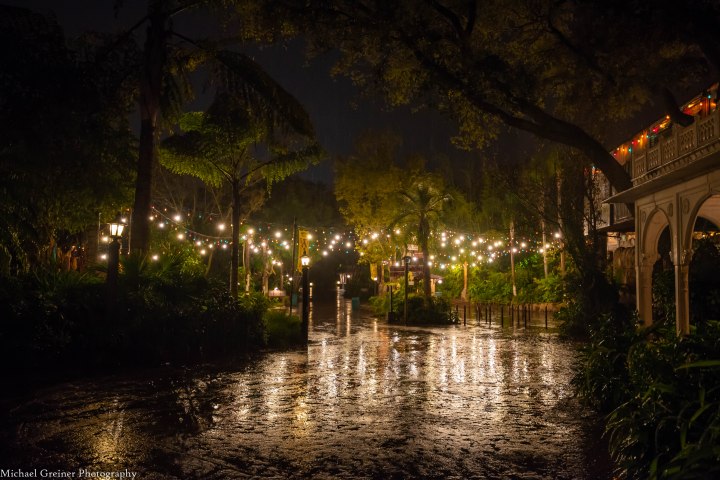 Due to the rain, I did not get anywhere near the amount of photos I would have liked. Also, many of the ones I did get were shot hand held in very low light which greatly reduces quality. With that being said, lets take a look at what we were able to accomplish.

Even though Rivers of Light does show during the event, I elected to watch the regular showing during normal operating hours instead. I covered that showing of RoL here. Since I was on that side of the park, and did not want to hit Pandora first, I elected to head over to Dinosaur to start the event. 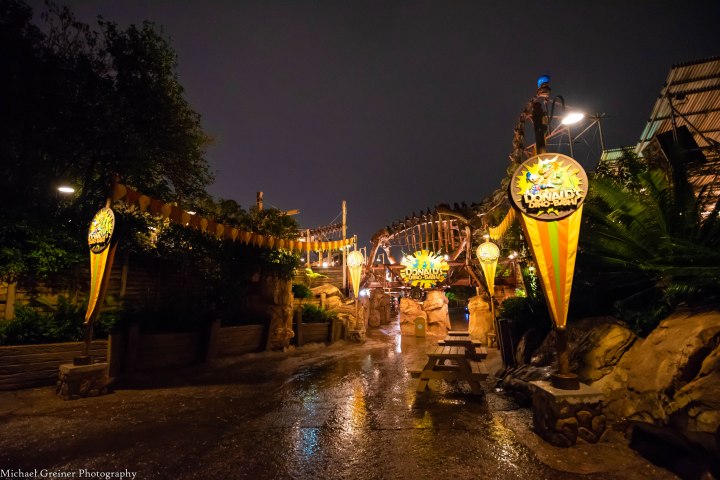 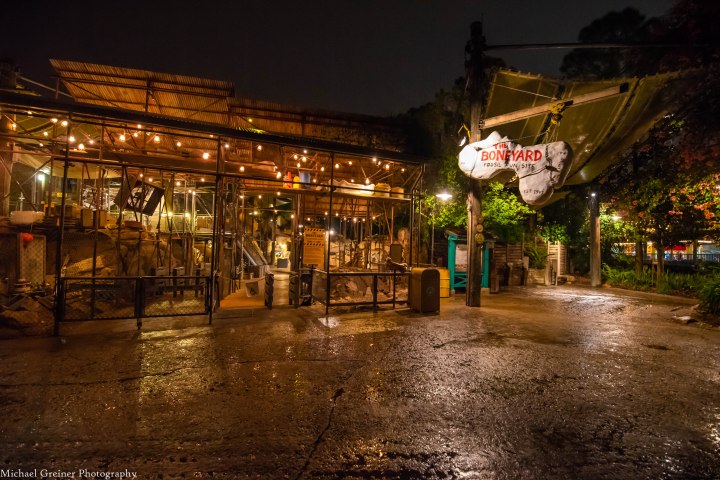 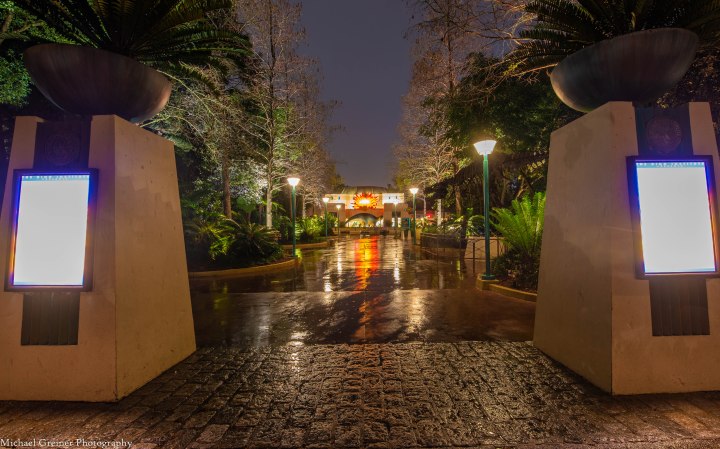 Here, I immediately ran into the first problem of the night. Dinosaur no longer operates until the end of the day at Animal Kingdom. It currently closes a half hour prior to park closing and will be switching closing a full hour of closing soon. Because of this, the ride did not re-open to After Hours attendees until 8:30 when the event officially begins. Disney puts a half hour buffer in between park closing and the start of the events to try and clear the queues of regular day guests.

The problem here was, all other rides at all 3 after hours events continue to run for attendees from park closing until the official event start time. Because of this, a large line grew outside the Dinosaur entrance during this buffer time of guests waiting for it to re-open. Now this only lead to a wait time of around 15 minutes, but if Disney just kept the ride open instead of cheaping out on operating costs, then it would have been a walk on from 8:00 on. Event aside, it’s ridiculous that they can’t keep this ride open until park close on a daily basis. 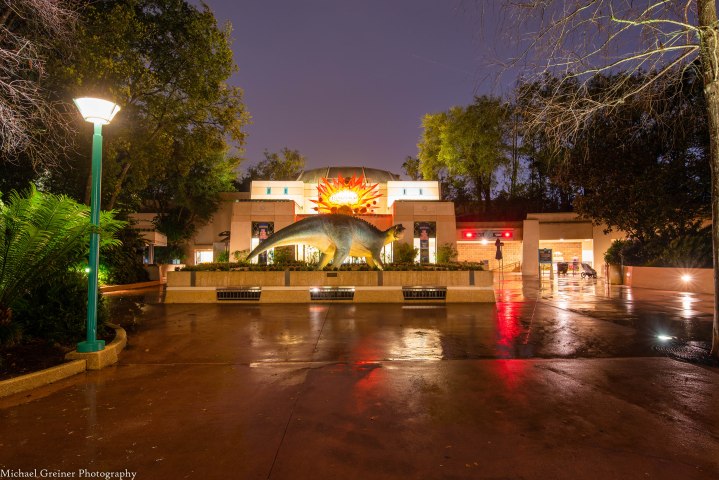 By the time I got off the ride I could have probably rode again with little to no wait. However I was already almost a half hour into the event and wanted to move on else where. With the rain really coming down, I tried to battle through and shoot some photos with my tripod. I gradually made my way over towards Everest. 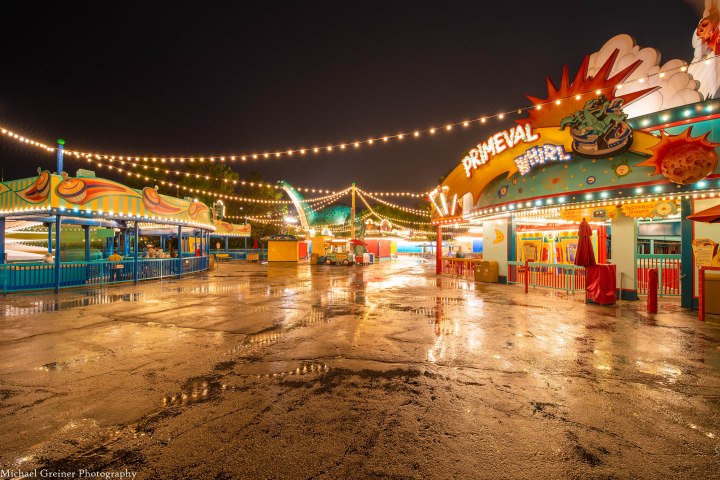 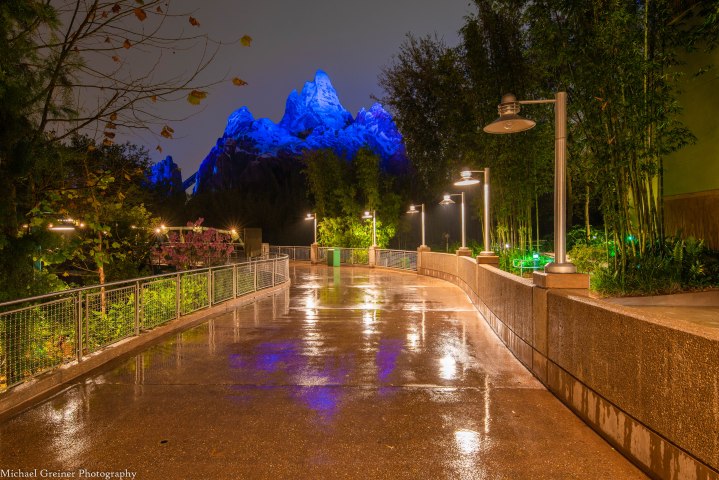 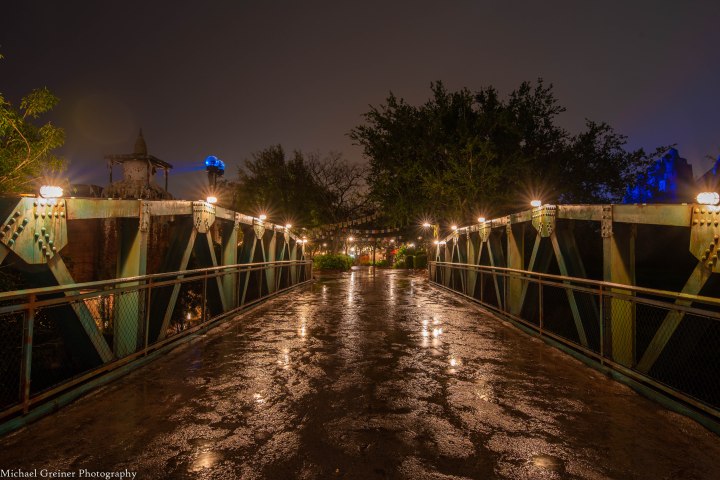 Most of the pathways were still pretty empty which mirrors our experience at previous after hour events at the other parks. There was a relatively decent crowd gathered in the Asia section, most of which were just trying to avoid the rain. 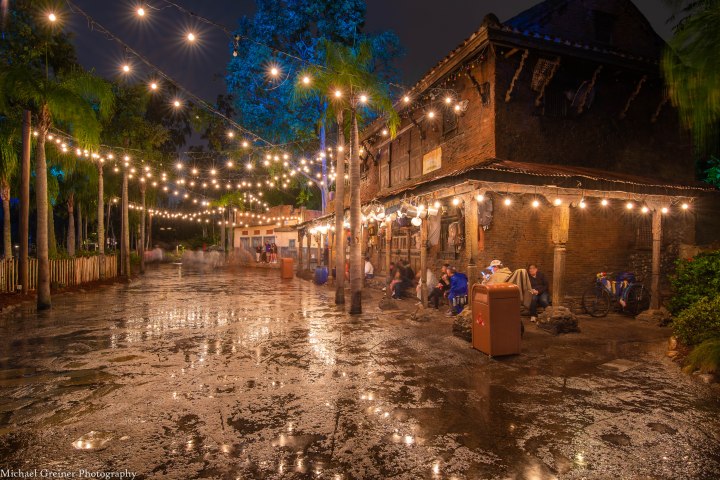 I was iffy on riding Everest with the weather but decided to give it a go. I had to put my camera gear away before getting in line as I didn’t want to be holding it on the ride in the rain. I only had to wait a minute or two to board. While the ride is always fun (especially at night), its not particularly fun riding any high speed coaster in the rain. Raindrops sting as they hit your face and its tough to keep your eyes open.

From here on out, all photos were shot hand held. It was seriously pouring at this point and I just could not keep my camera on the tripod without risk of ruining it. I started to make my way over towards Africa. 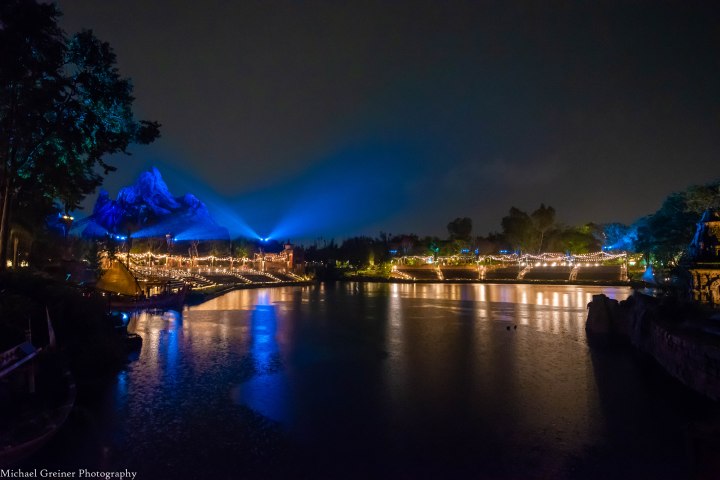 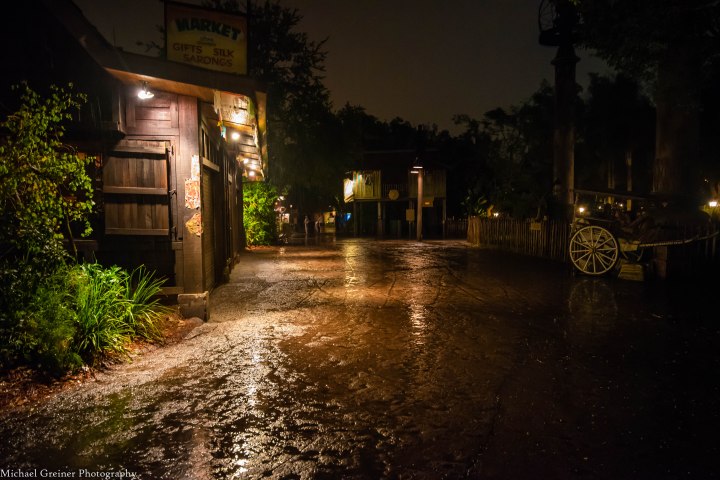 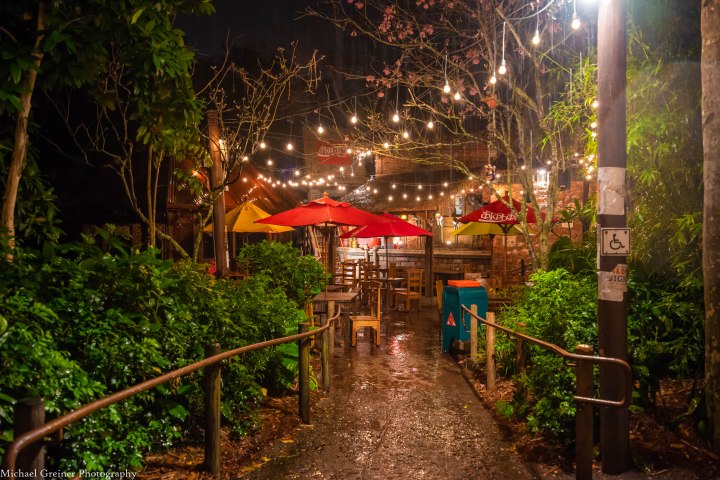 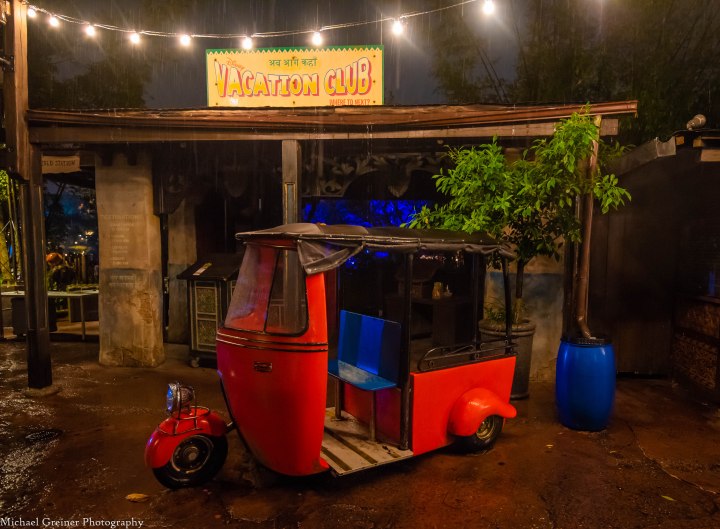 There are not any rides open in Africa during the event, however some of my favorite spots to photograph are there. Sadly, when I got as far as the bridge from Asia to Discovery Island, the pathway leading towards Africa was closed. I asked if this was due to the rain but couldn’t get a real answer out of the cast member standing guard. 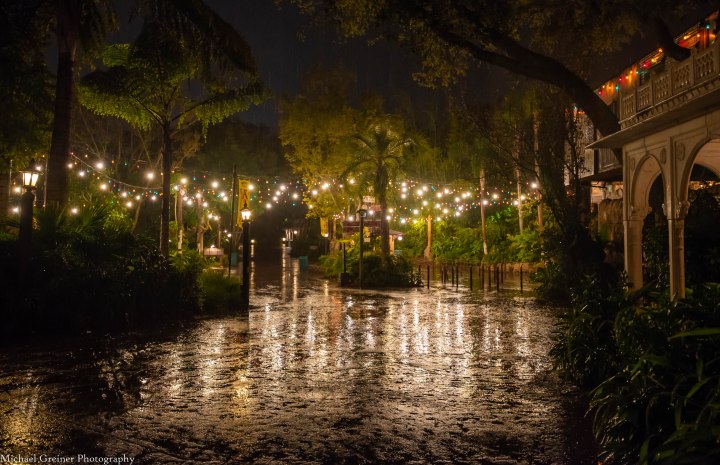 Ahead in the photo above is the entrance area to the new “Up” bird show. While the show itself is pretty meh, the new entrance Disney made for it is really nice, especially at night. I was bummed they wouldn’t let me down there to take some photos. Instead I will share with you a photo that Josh from easywdw.com took of the facade. 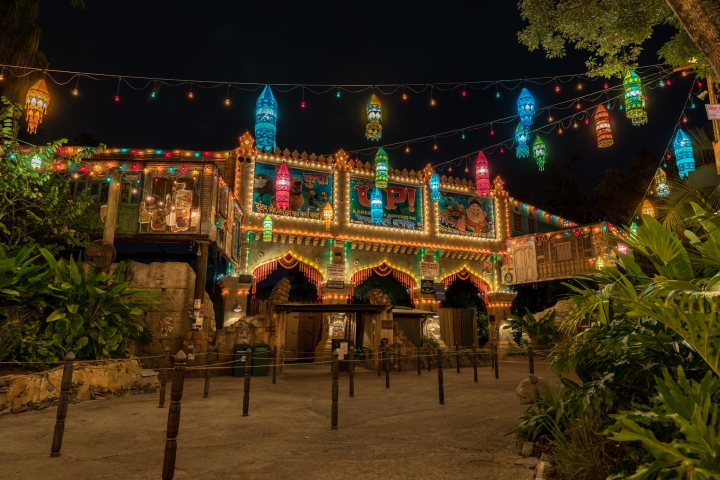 Since I couldn’t head to Africa, I started to make my way over to Pandora. 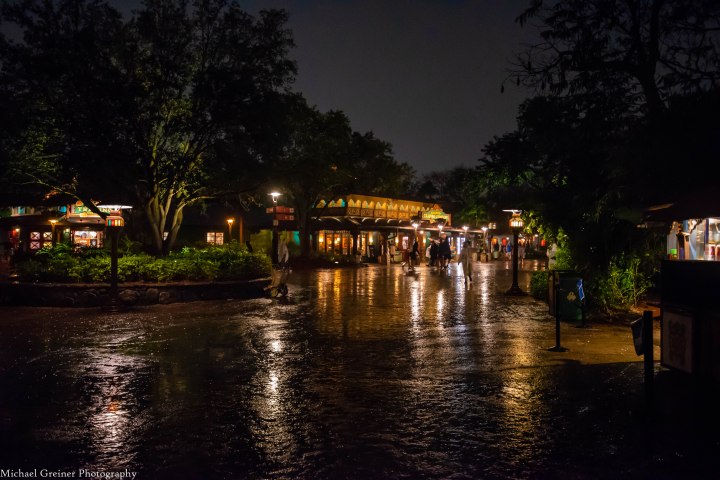 There was a decent amount of people just hanging out between the two shops in front of the Tree of Life. 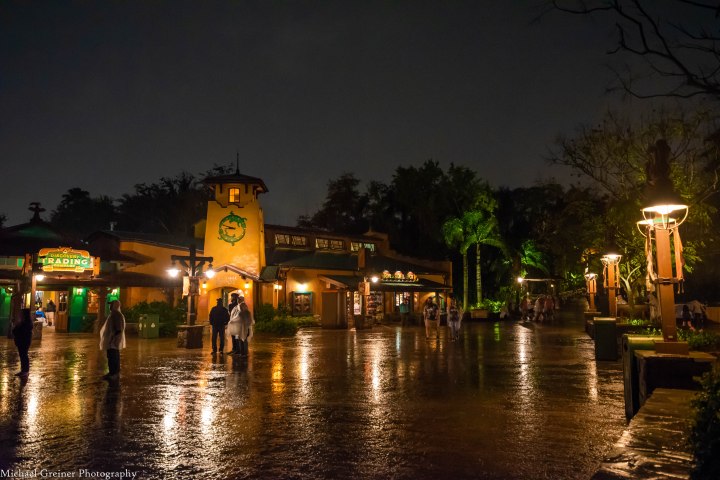 There were more folks leaving Pandora then heading in which I figured was a good sign. 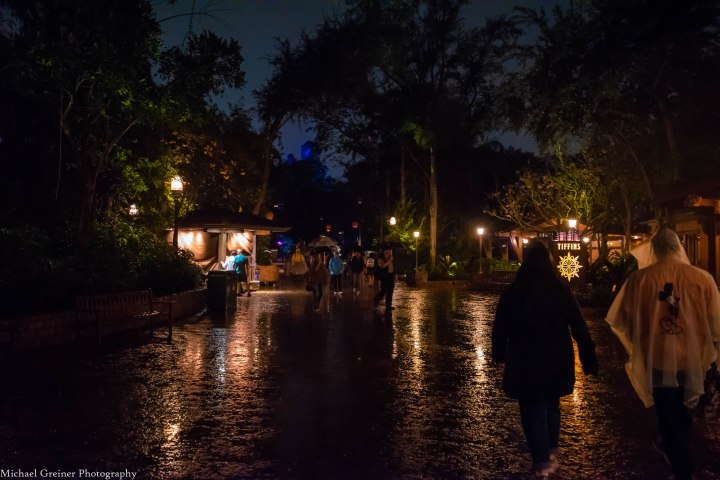 I tried to get some photos of how the ground lights up at night, but the result wasn’t great. It was just too dark. 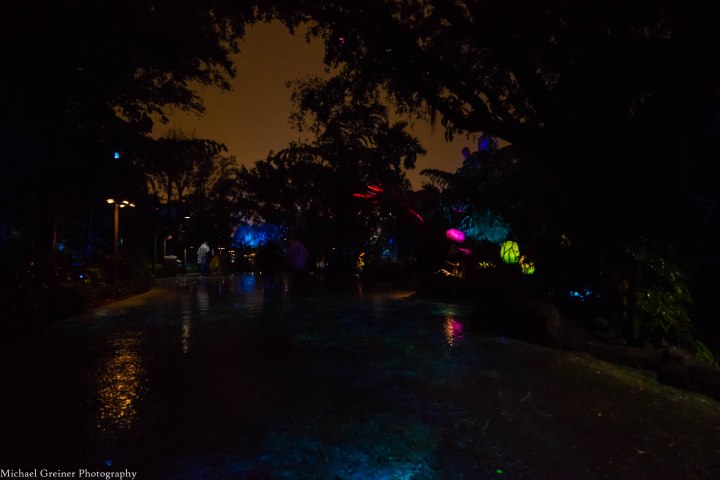 Pandora always has an orange tinted sky in night photos as well due to light pollution in the area. I guess it kind of works in making it look more alien?

Honestly, Pandora is the draw of this event. All other experiences at Animal Kingdom can be done fairly stress free most days during regular operating hours.  I decided to take a ride on Na’vi River Journey first. 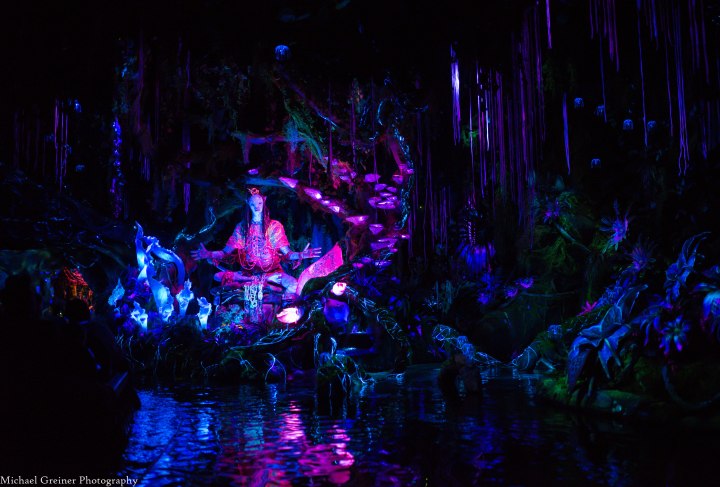 A full ride through and review can be viewed here.

I waited about 7 minutes to ride which was quite frankly disappointing. You can basically walk on to this ride either first thing in the morning or at the very end of the night on any normal operating day. Unfortunately, things were about to be a lot worse over at Flight of Passage.

I entered the Flight of Passage queue to a 10 minute posted wait right. The event uses the fastpass queue for all guests. 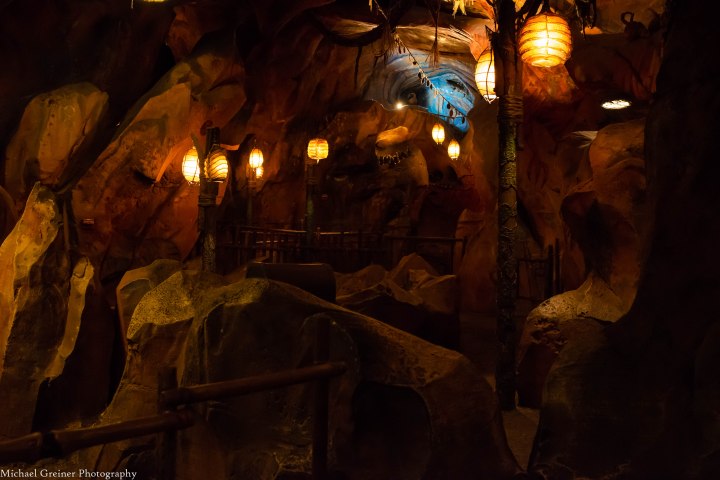 Everything seemed fine at first as the line was backed up to right around the normal spot it would be if you had a fastpass. Typcially, even with standby mixed in you are probably looking at around a 10 minute wait to the pre-show from there.

This night however, Disney had ONE theater operating for the event. Because of this, the line moved at a very slow crawl. It took me 42 minutes to reach the pre-show. I was back out front of the attraction 24 minutes later for a total experience time of 1 hour and 6 minutes. This is crazy for an event that charges a small fortune for no other reason than the advertising of short wait times. It’s inexcusable that this long wait time was caused by capacity issues because Disney did not want to fully staff the ride.

Now, if technical issues were solely to blame for the capacity that would understandable. However, no announcement was made to any of the many angry folks on line. When I asked the cast member the reason for the long wait, no explanation was given. Again, the wait time sign out front said 10 minutes. My guess is that Disney had 2 of the 4 theaters running for the event and 1 went down with technical issues. So simply because they didn’t want to pay to run the ride at full capacity, a lot of folks nights were negatively impacted.

I brought this up on twitter the night of and was shocked at the amount of people blindly defending Disney on this.

Other’s thought I should just be happy to be in Florida.

This lead to me posting this response with I firmly stand by. 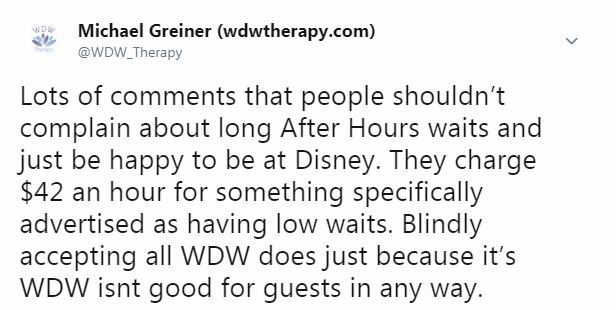 At least Josh had my back. 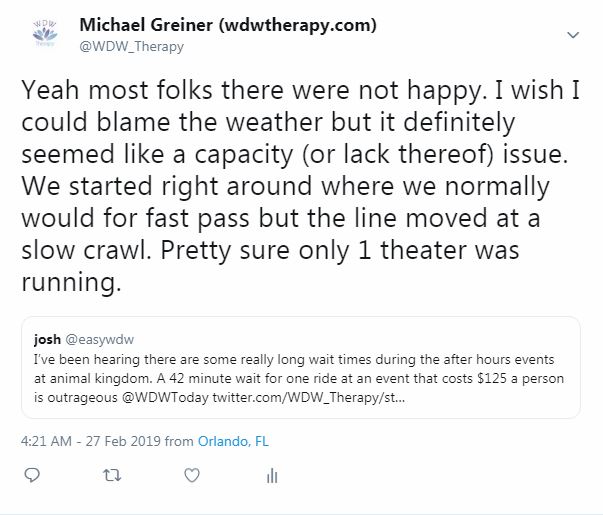 With that little tirade out of the way, I will say that I do believe that this was an anomaly.  I don’t expect FoP to typically be a walk on during these events, but I think a 10 -15 minute wait is more reasonable. Easy WDW reviewed two AK after hour events back when they first debuted, and both of which were much more what we would expect. They can be found here and here. I strongly recommend checking them out as they both feature a ton of great photos and useful information.

While the After Hours events have definitely gained in popularity, I think the attendance is still capped low enough that most nights wouldn’t be a problem. That being said, some basic operating  gaffes by Disney definitely helped make this night less than stellar. If FoP had been running at full capacity it would have made a world of difference. Likewise, if they ran Dinosaur til closing it would have made life easier there. I really wish they had kept the Africa section of the park open as well. I was also bummed they wouldn’t let me walk the FoP regular queue to take photos, something they have done on previous nights (see Josh’s post).

At this point in the night I had enough. The rain was relentless and the FoP fiasco had me pretty sour on the evening. I decided to head out around 11 pm (a half hour til the close of the event.) Since I didn’t bother to take my camera gear out for more photos, I’ll throw in some others from a standard operating day after closing. 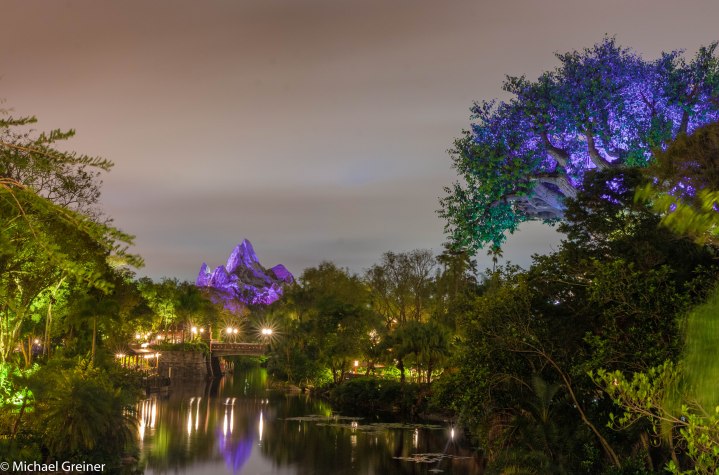 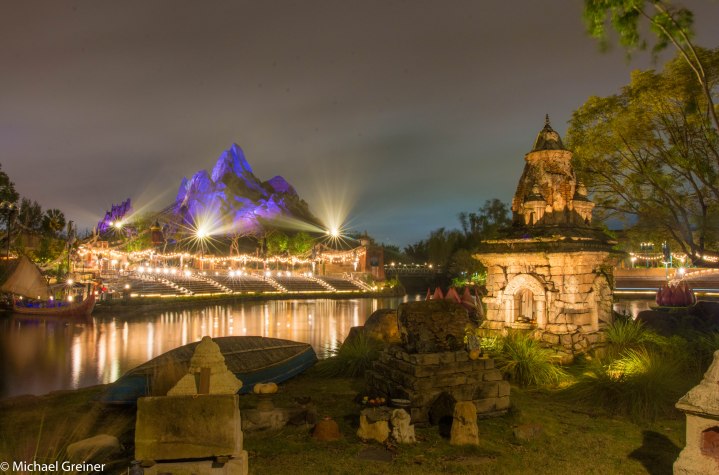 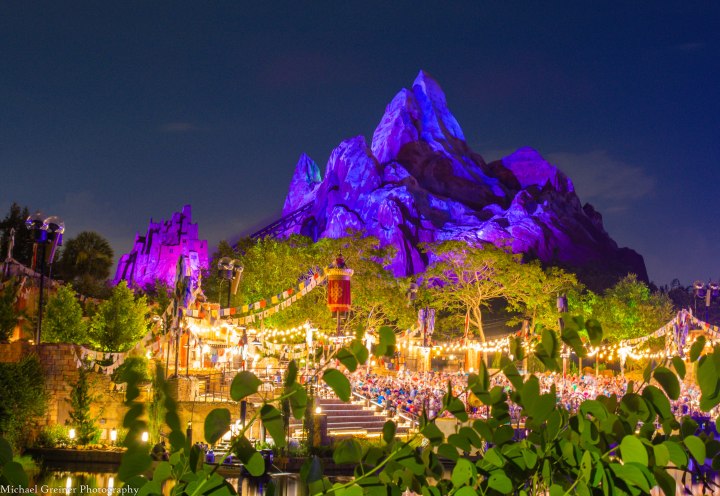 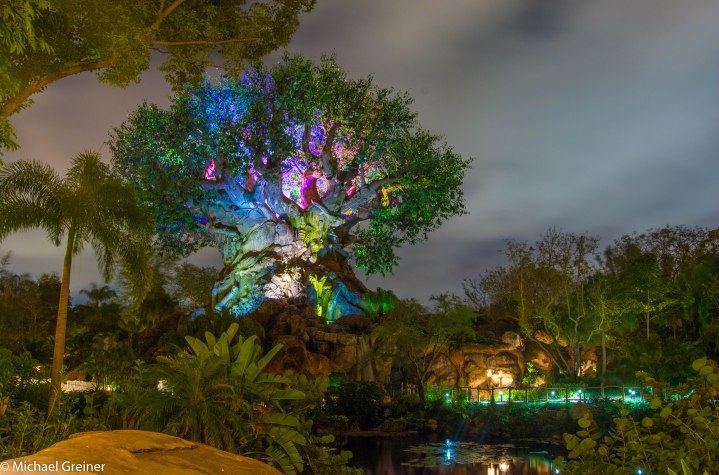 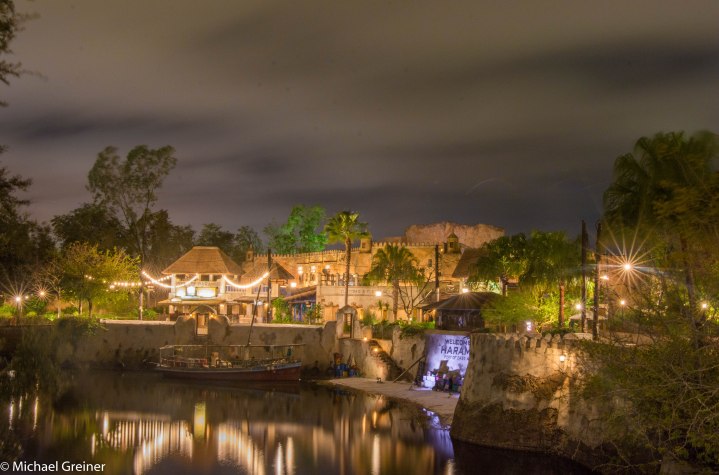 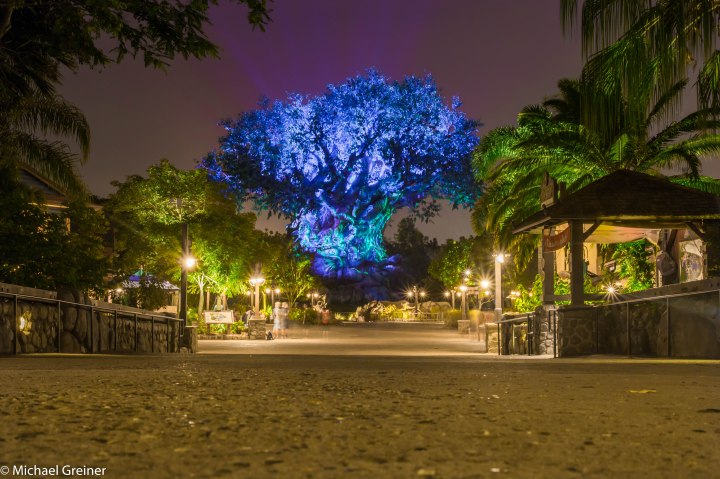 Overall, while I didn’t have a great night, I still think most will on a more typical event evening. I absolutely love this park after dark and just being able to explore it mostly empty is wonderful. I would hope that on a dry night, Africa would be kept open as its my favorite area of the park (it was open in Josh’s posts).

I would love to do this event again so hopefully they extend the dates which currently end in April (my next trip is early May). If any of you have done this event, please share your experiences in the comments below.