Frozen: Live at the Hyperion is a Broadway style stage show in California Adventure Park. The show replaced the hugely popular Aladdin: A Musical Spectacular which ran for 13 years prior. Many people were upset by the change, not only because the Aladdin show was so much fun, but also because this came at a time where Frozen was being wedged into the parks in any way possible. Fortunately, the Frozen show is really good as well. Its a quality show with high production value.

We loved the old Aladdin show just like everyone else, but the Frozen show is closer to a Broadway level of production then its predecessor. We have seen both Aladdin and Frozen on actual Broadway and the Frozen show is far closer in quality to its NYC counterpart than the Aladdin show ever was. After seeing Aladdin on a Broadway stage, it made the California Adventure show kind of pale in comparison. It was still a super fun show, especially the Genie, but overall we are happy with the Frozen replacement.

The show offers a dining package but its very expensive and we don’t recommend it. If you want to get a really good orchestra seat, you may need to show up 45 minutes – 1 hour before showtime. We on the other hand were perfectly happy showing up 5 minutes prior to showtime and sitting in the front row of the balcony. All of the photos in this post are from that spot, shot with a Tamron 70-200 mm f2.8 lens.

So let’s take a look at Frozen: Live at the Hyperion. 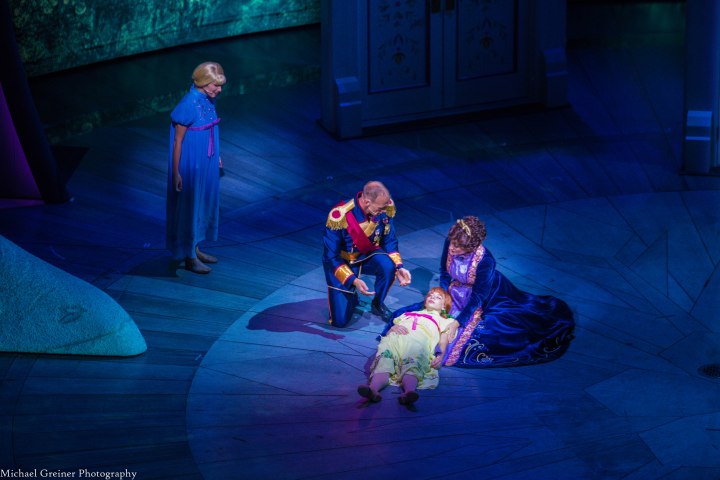 The show follows the plot of the movie pretty tightly. It starts with the sisters playing and Elsa accidentally injuring Anna with her powers. 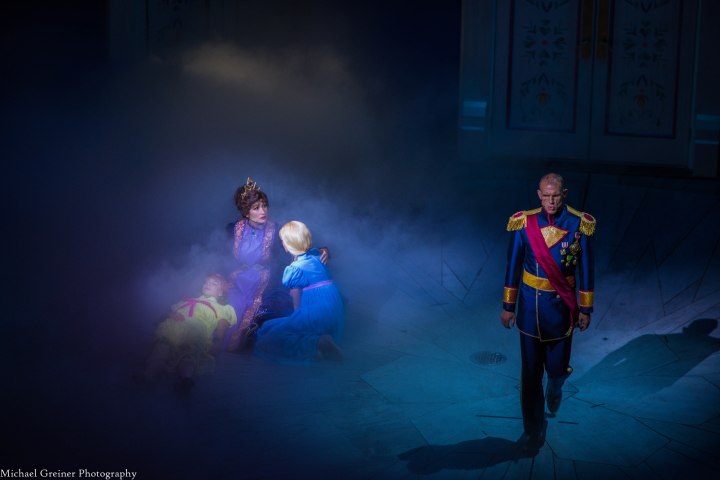 This leads to Elsa being locked away from Anna for the rest of their childhood. Anna doesn’t get why and just wants to build a snowman with her sister. 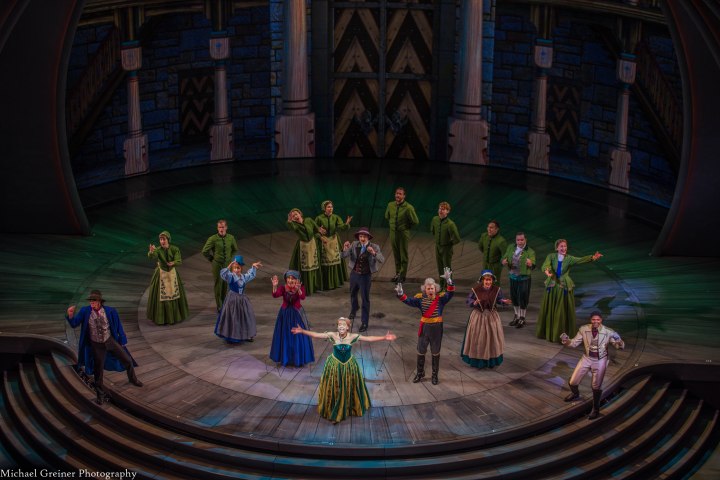 Finally, Elsa turns 18 and its time for her coronation as queen of Arendelle.

On coronation day, Anna meets Prince Hans. Of the Southern Isles of course.

The ceremony goes off without a hitch and good times were had by all.

The Duke of Weselton was particularly entertaining. 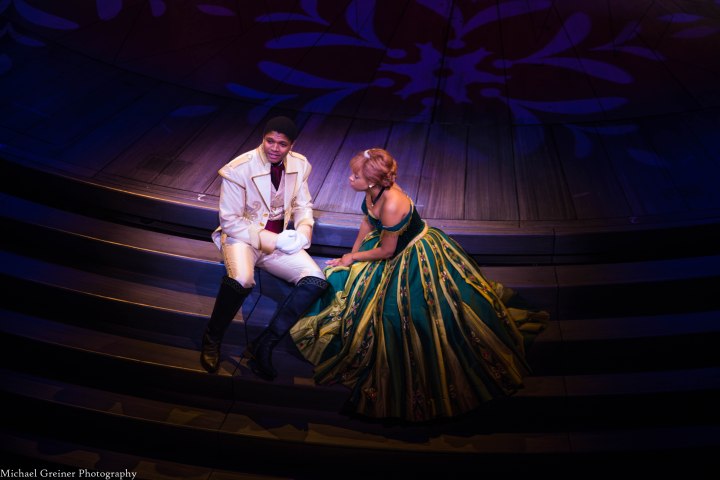 Hans and Anna escape the crowded party, sing their catchy movie from the song and get engaged in the process.

Queen Elsa does not approve of this, snaps and lets her powers loose on the party, setting off an eternal winter in the process.

Everyone get freaked and Elsa runs away to the North Mountain to deliver the show stopping ballad (that you all know and love… or hate) that is Let It Go.

Personally, I still think its a good song and it delivers a big moment in the show. 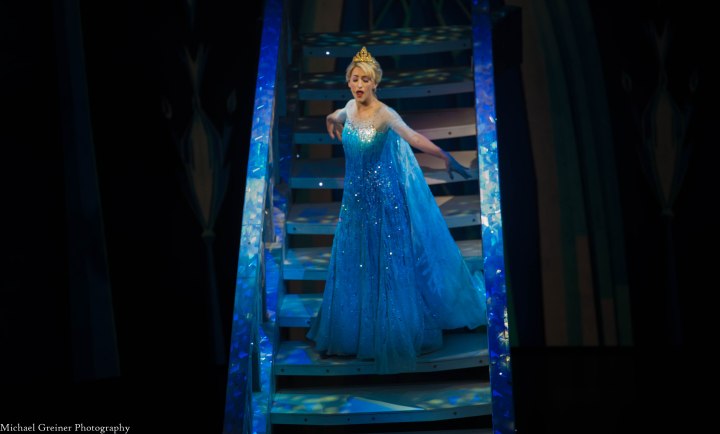 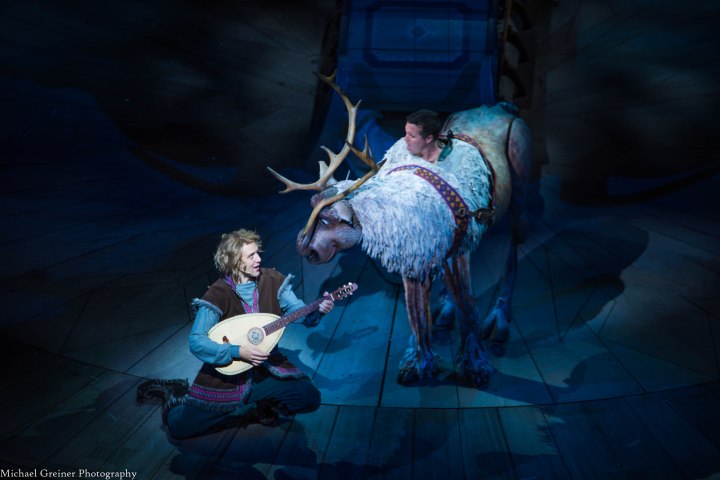 Anna goes out into the cold to find her sister and comes across (ice merchant) Kristoff and his Reindeer buddy Sven. 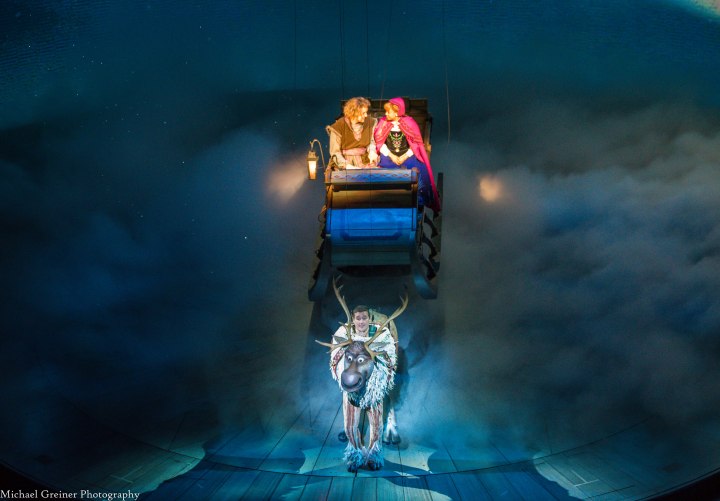 Everything goes swimmingly until they are attacked by wolves. 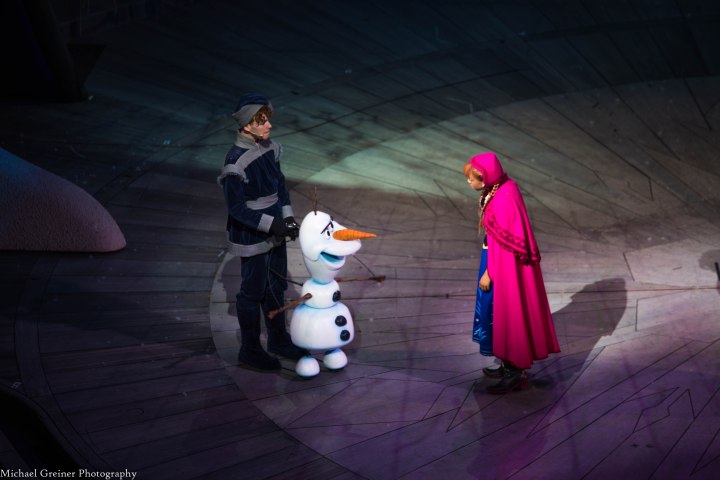 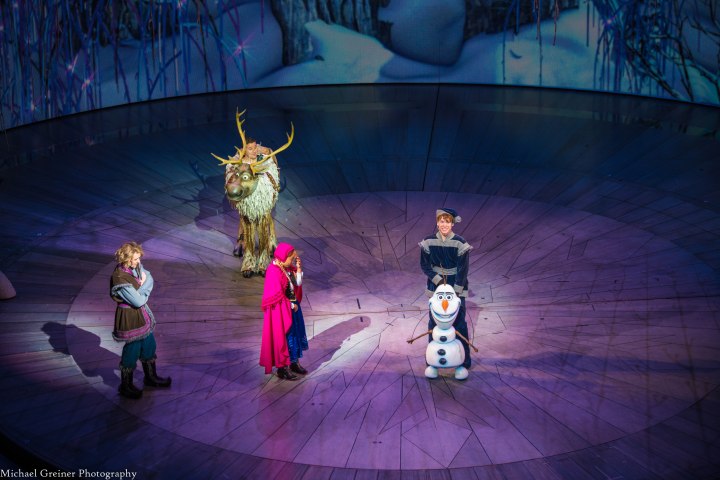 He likes summer and warm hugs. 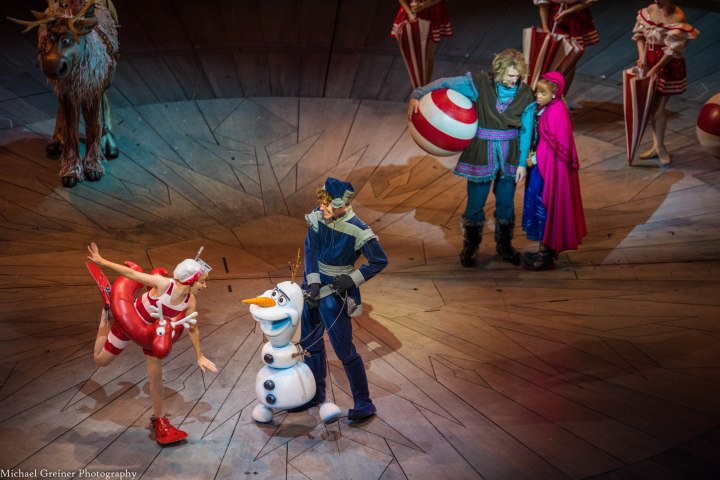 They find Elsa which gives us the underrated reprise of “For The First Time In Forever”. 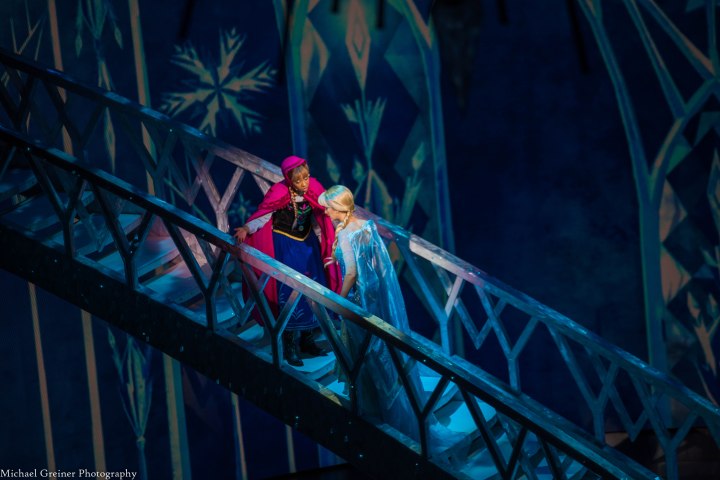 Anna is struck again, this time in the heart, by Elsa’s freaking out power. So Kristoff takes her to his troll family to try and get some help. 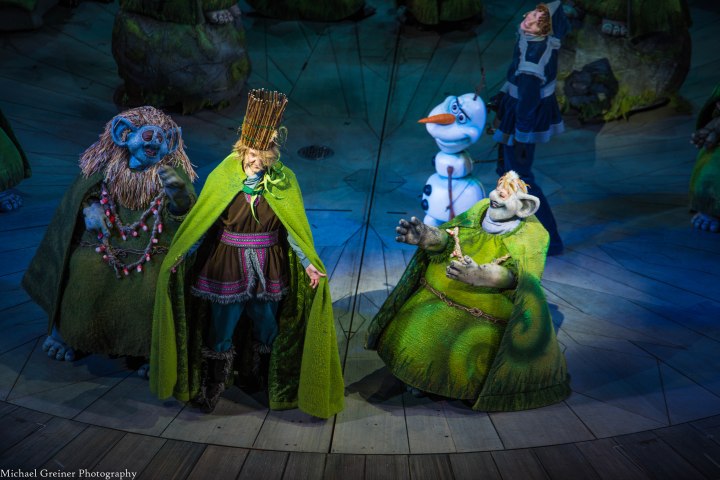 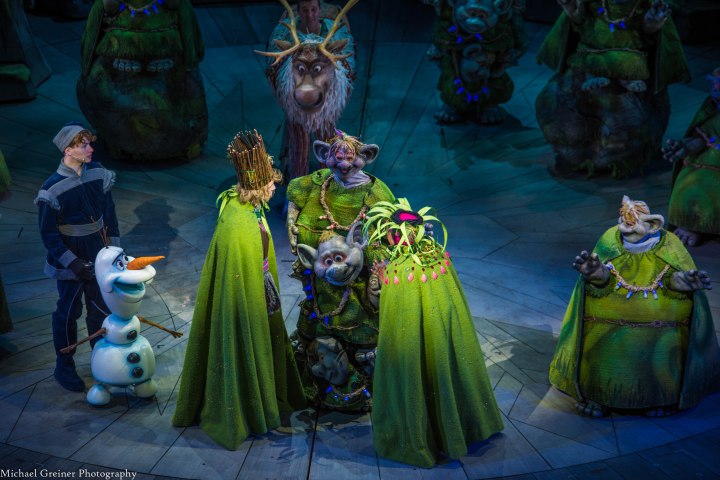 Instead, they sing “Fixer Upper”, try to perform a marriage ceremony and tell Anna there is nothing they can do for her. For only an act of “true love” can save her.

So she returns to Hans looking for a “true love’s kiss… but then this happens. 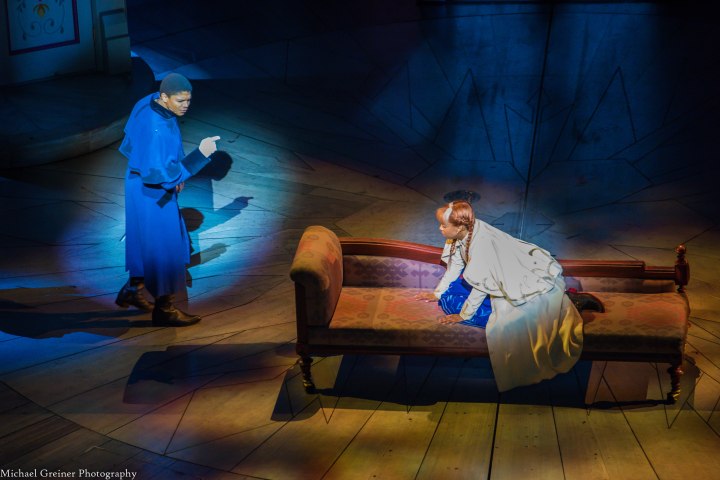 He was using Anna all along. Go figure.

Luckily Olaf returns to let her out and give her a little pep talk. He makes her realize that Kristoff is the one who loves her. 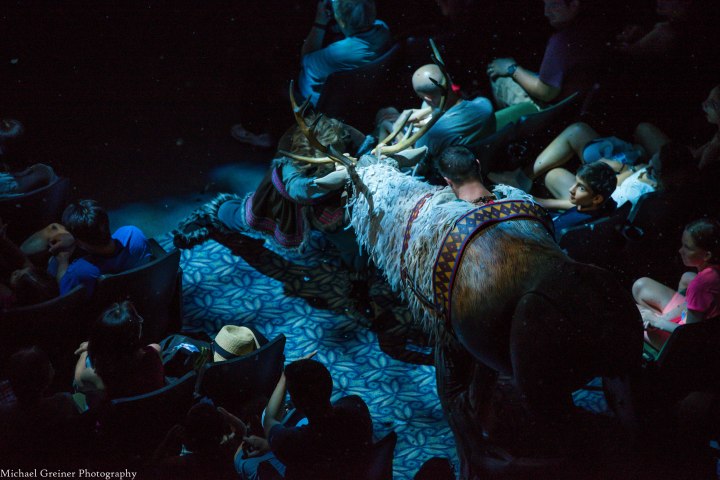 Sven tries to get Kristoff to return via the audience, but Kristoff is a bit resistant.

Out on the ice, Hans lies to Elsa about what happened then attempts to murder her.

But Anna jumps in front and takes the blow for Elsa.

Her frozen heart takes over right as the sword connects freezing her entire body.

Luckily, this counts as an act of true love and Anna soon thaws out back to normal.

Hans is caught and everybody is happy again. 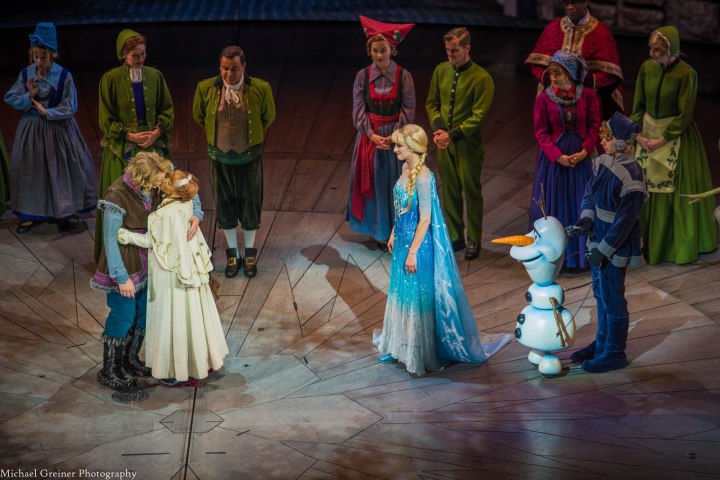 Thanks for reading. If you’ve seen the show, let us know what you think of it in the comments below.

One thought on “Let’s Watch… Frozen Live at the Hyperion”