Up until now, pretty much everything I’ve posted on the blog has been positive. Obviously, I enjoy writing about things I enjoy and sharing that with all of you.

That, being said, there is PLENTY to complain about with the current state of WDW as well. While I could write entire posts on the current states of Epcot and Hollywood Studios, I’ll save that for another time.

For now, I’m going to focus on the current attraction lineup throughout the four parks and dive into which ones don’t measure up. These are the 11 WORST attractions currently at Walt Disney World.

Note: Just like our Top 11 Rides at Walt Disney World list, this is completely subjective. Be sure to let us know your opinions in the comments below!

11. Journey Into Imagination With Figment

This one really pains me, as the original version of this ride is one of my favorites of all time. Perhaps if the original version never existed, then I would not look at the current ride as negatively as I do. After all, it still has some fun visuals and features one of the best songs ever recorded for a Disney park.

But the current version is just a hollow shell of its former self (though somehow still much better than the short lived middle phase of the attraction). It actually makes me sad just thinking about it. Gone is most of the awe inspiring charm and creativity of the original, and the “new” Figment is annoying. We still ride this every trip for sake of tradition, but it seems to get harder and harder for us each time.

NOTE: For a great look at the original version of the attraction, check out Disney Tourist Blog. Tom has put together a great tribute to it, including many reader contributed photos.

10.  The Seas With Nemo and Friends

I want to be clear, when I say The Seas With Nemo, I am talking about the ride portion to enter The Seas pavilion, not the pavilion itself. The pavilion itself is great and I think an underrated area of Epcot.

The Nemo ride however, which replaced the previous Hydrolators and Sea Cabs, is none too impressive as far as I’m concerned. Relying heavily on projections and stationary sets, the ride is quite frankly boring.

Obviously they didn’t have a ton of room to work with, but considering the technology available when this was built, what we got is nothing less than disappointing.

I’m guessing this would not make most folk’s lists, but I have some pretty strong feelings about what a wasted opportunity this ride is. I love river rapid rides almost everywhere else, but Kali Rapids consistently disappoints. The ride is WAY too short, sparsely themed and is completely hit or miss in terms of getting wet.

When compared to Bilge Rat Barges at IOA, or even Grizzly River Run in DL, Kali is an absolute joke. The only (somewhat) saving grace for the attraction is that it has a really great queue, with tons of authentic  details. 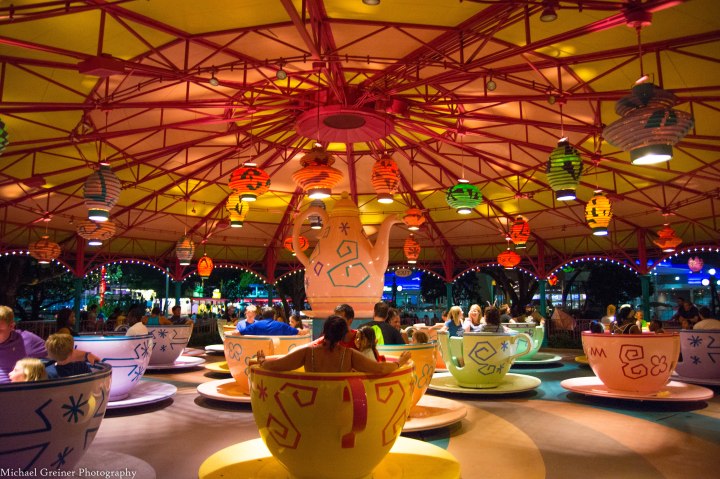 A classic for many, I do not enjoy the teacups. They are a short carnival ride with the sole purpose of making you dizzy and sick. The fact that they rarely have much of a wait shows that I am probably not alone in my distaste for them.

That being said, my 7 and 10 year old nieces enjoy them so I guess they serve their purpose. Still, its not enough for me to keep it off the list.

Managing to take something as great and fun as go kart racing, and turn it into one of the worst attractions in WDW is quite an accomplishment. The karts are painfully slow and the rails to keep you on your path mean you many get stuck behind some kid who stops every 15 feet.

I get that its this way so kids can drive, but I still hate it. It just sucks the fun out for everybody, including many kids. Both my nieces, who love regular go karts, do NOT like this attraction. 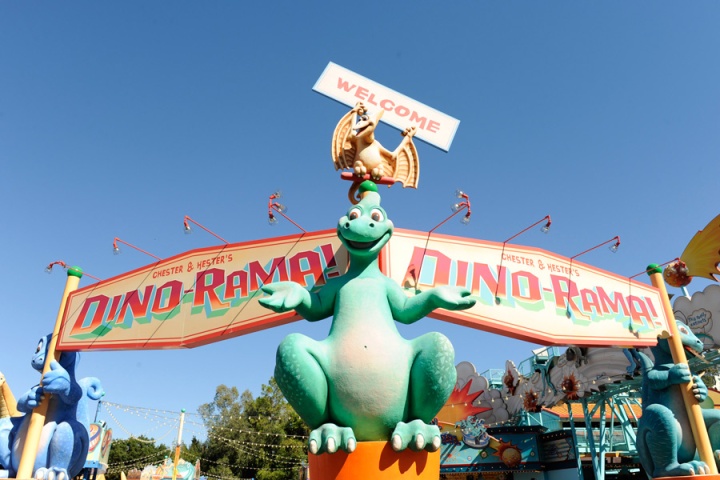 Overall, Animal Kingdom is WDW’s best themed park in my opinion. Sure, MK has its share of wonderfully themed areas and rides, but in terms of cohesive theme, AK is as good as it gets… EXCEPT, for Dinorama.

Made to look like a roadside pop up carnival, Dinorama is a disgrace to the rest of the park. Not only is it an eyesore, but it takes up a lot of space and offers nothing worth doing.

Primeval Whirl is a wild mouse coaster with cars that spin (which research shows approximately zero people ever asked for). Its a rough ride thats as painful as it is unexciting. Triceratops Spin is a basic “Dumbo” type spinner. Skip this and ride Dumbo instead (or Astro Orbiter if you prefer). 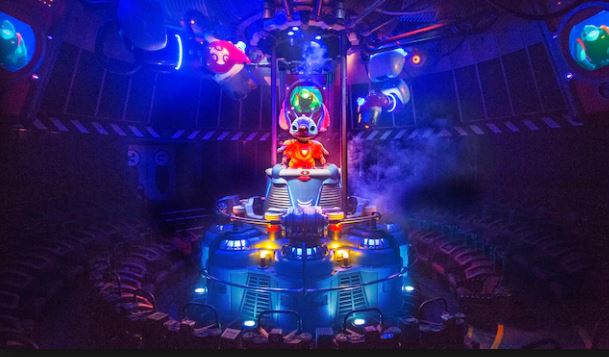 I debated whether to include this or not as it has been running seasonally the past couple years. Rumors always seem to suggest it may finally be closed for good only for it to briefly re-open again. Until a replacement is officially announced by Disney, I refuse to believe that this attraction is dead.

I actually like Lilo and Stitch quite a bit. Stitch is a star in the timeless treasure that is “A Totally Tomorrowland Christmas” and there easily could have been a good attraction based on the character. But take my word for it, this ain’t it!

For those who don’t know, this attraction replaced the old “Extraterrestrial Encounter” attraction that closed when it was deemed to scary and dark for the Magic Kingdom. The old encounter was great for adults but scared a lot of kids half to death.

So the scary alien was replaced with Stitch, with much of the “scares” being replaced by gross out “humor”. The problem is, many kids are still scared by the attraction while adults just find it off putting. This lead to an attraction almost universally disliked by all.

From here on forward, the rest of this list is more about Disney’s decision making more than anything else. There is nothing wrong with any of the shorts shown here. In fact, all of them are really good. But you can watch them at home anytime you want. There is nothing new here, aside from a few physical effects thrown in while you watch.

When I was young, Honey I Shrunk the Audience played here and it was great. Even Captain EO, which i disliked personally, was at least something unique to the parks. This is just a lazy excuse for an attraction and Disney should do better. When a Star Wars land was announced way back in 2015, Hollywood Studios decided to try to fill the gap of the long construction period (Galaxy’s Edge still won’t be open until the end of next year), with a bunch of cheap quick entertainment.

Star Wars Launch Bay is the best of the “temporary” offerings (which isn’t saying much), but it also came at the highest cost. The Animation Academy was one of Hollywood Studios hidden gems, and was one of our favorite things to do in WDW. Well, it closed to make room for this nonsense and I will never forgive Launch Bay for that.

Advertised as a “stage show” Star Wars Galaxy is just a glorified meet n’ greet, but without the opportunity to actually meet or greet any of the characters.  The clips that tie together the “story” are pointless other than that the characters just kind of show up and stand there. 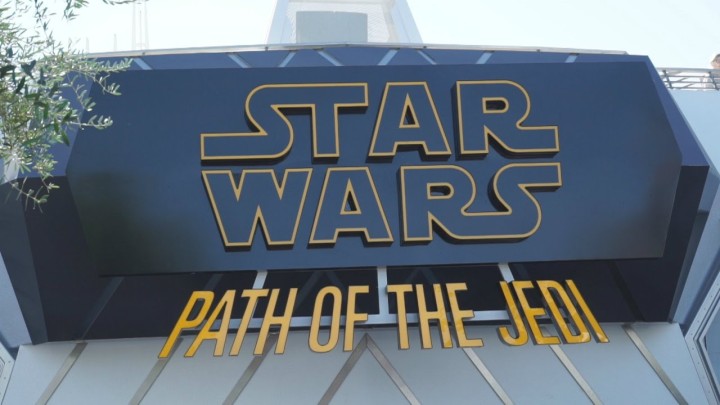 The worst of the lousy Star Wars based entertainment, Path of the Jedi is literally a clip show of the films. It makes the Disney Pixar Film Festival look great in comparison. Its a waste of valuable time in the park and should be skipped.

As with the other Star Wars offerings above, this type of cheap and phoned in entertainment does not belong in a Disney park. They should be held to a higher standard than this.

Luckily for us, Galaxy’s Edge looks like it will live up to all the hype and then some (if you can manage to get anywhere near it within 5 years of its opening).

Let us know your thoughts on the worst WDW attractions in the comments below. Thanks for reading.

Disclosure: I typically use all of my own photos in posts. I did not have photos for all attractions in this list and resorted to google for some. Any photo that does not have my signature in the bottom left corner, is not my property.

One thought on “11 Worst Attractions at WDW”